My Friend Pedro Comes To PS4 Next Week

The balletic side-scrolling shooter is finally coming to PS4, giving more people the chance to befriend a banana and kill enemies with the help of a frying pan.

Publisher Devolver Digital has announced that My Friend Pedro is heading to PlayStation 4 next week on April 2. The side-scrolling shooter was originally released last year on both PC and Nintendo Switch.

The PS4 version will include extra Code Yellow content, which adds 14 full-throttle game modifiers and some highly requested features, such as an in-game timer for speedrunners, a hidden HUD option, and plenty more.

Developed by DeadToast Entertainment, My Friend Pedro is a balletic action game revolving around a guy who's friends with a sentient banana. It's use of split aiming, slow-motion, and stylish combos bring to mind the early Hong Kong action thrillers of director John Woo, where inventiveness and flair are just as important as simply staying alive. You can even kill guys by ricocheting bullets off a frying pan.

GameSpot's My Friend Pedro review awarded the title 7/10 when it launched last year. James O'Conner said, "Pedro is worth playing because it's full of moments where you can jump down a shaft and shoot in two directions in slow motion, or kill an enemy by kicking the skateboard you’re riding into their face, or take out a room full of bad guys with the help of a frying pan. When it dedicates itself to letting you be inventive and weird with how you rack up your kills, My Friend Pedro is wildly enjoyable." 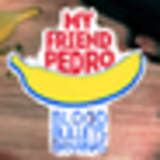