MX vs. ATV Unleashed: On the Edge Hands-On

Motorcycles, ATVs, monster trucks, oh my! We grab huge air with a preview build of this PSP off-road racer.

MX vs. ATV Unleashed: On the Edge is the PlayStation Portable follow-up to last year's successful MX vs. ATV Unleashed, a game that aimed to throw everything but the kitchen sink into the off-road racing formula that has defined the MX vs. ATV series. Featuring not only standard MX bikes and four-wheel ATVs to race on, Unleashed also tossed monster trucks, dune buggies, and golf carts into the mix. With On the Edge, that mixture of mud-slinging rides returns, this time on the PSP. We spent some time with the handheld version of the game to see how it's shaping up ahead of its late-February release.

The main modes in On the Edge's single-player game are race, freestyle, and free ride. Free ride lets you run through a number of supercross tracks and practice your jumps and freestyle tricks without the encumbrance of a clock or competition. In freestyle mode, you'll take those same tricks you've practiced and put them to work for you against up to three other competitors. There are a number of different trick-based contests to enter here--high-score challenge, combo challenge, follow the leader, and big-air challenge--but the gist is to perform as many tricks as you can in midair and always nail the landing on the way back down (otherwise the points you rack up won't count).

Most folks will be spending the majority of their time with On the Edge in racing mode, which is the beefiest mode found in the game. There are seven total race types found in the game, and they cover the gamut of racing styles found in the console versions of MX vs. ATV Unleashed. You start off with two basic modes--supercross and nationals--but you'll quickly unlock short track events and waypoint races and eventually move on to hill-climb events, open-class racing (which presumably unlocks some of the stranger vehicle choices available in the game), and finally supermoto races. You'll have plenty of options for customizing these single-player races--from number of laps run, to the types of vehicles you want to ride against.

Once you're in the race, it's nice to see that the PSP adaptation of the game compares very favorably with the graphics found in console versions of MX vs. ATV. Riders and bikes are all impressively modeled, and there seems to be very little detail lost in either the models or the tracks themselves, which should also be familiar to MX vs. ATV players. On the downside, we've only raced against a maximum of three other riders, which doesn't always make for gripping races--even if it does mean the game maintains a solid frame rate throughout.

On the Edge's controls are tight right out of the box--the X button is for acceleration, the square button is for brakes, the left trigger controls the clutch, and you steer with the analog stick (or, less accurately, with the directional pad). Tricks are pulled off with the circle and triangle buttons and are modified with the right trigger. While the controls feel familiar, getting used to the extremely sensitive analog stick takes some time. It's easy to oversteer in certain corners and almost turn yourself around completely before you realize what happened, but with a bit of practice, you'll learn to compensate for the touchy control. Jumps can be pre-loaded as well by pulling back on the analog stick, then pushing forward at the edge of the jump to gain maximum air.

If you're tired of the single-player game, On the Edge will let you take on three other players via the PSP's built-in ad hoc Wi-Fi connection. We had only one copy of the game on hand, so we weren't able to check out the mode for ourselves, but if it plays as solidly as the single-player game and with minimal lag, it should be a nice diversion.

On the audio front, On the Edge has a very straightforward presentation. The menu music seems to be ported directly from the console game, and the artist list on the game soundtrack reads similarly as well--you can expect to hear songs from the likes of Black Eyed Peas, Kottonmouth Kings, Papa Roach, and (ugh) Nickelback, among many others. The familiar bleat of MX and ATV engines is also the same as in the console game.

In all, On the Edge looks to be a fairly literal translation of the console game, though without the semi-career mode that had you earning points for race wins. Our biggest concern with the preview build of the game we played was the minute-plus load times that had us chewing our nails in boredom before races. Here's hoping those load times are dramatically reduced in the final build of the game. Should that be the case, On the Edge will be a good destination for those wanting to take their off-road adventures with them on the go. We'll have a full review of MX vs. ATV Unleashed: On the Edge once the game reaches store shelves next week. 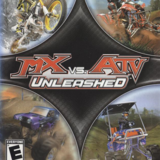