Mutant Year Zero Devs Reveal Corruption 2029, And It's Out Next Week

No mutated ducks this time around.

One of the best surprises of 2018 was Mutant Year Zero--a tactical strategy game with similarities to XCOM, but with a brilliant stealth element that allowed you to plan ambushes before engaging in combat. It's not surprising that developer The Bearded Ladies are back with another strategy game, but it is surprising that it's out next week.

Corruption 2029 trades out the mutated animal characters from Mutant Year Zero but retains the post-apocalyptic settings, this time populating it with warring factions that resemble XCOM a lot more. In this near-future you'll take command of a squad of highly-augmented soldiers as they fight to topple an inhumane regime that has devasted the USA. There's not much explicit gameplay in the reveal trailer below, but it gives you a good sense of the shift in tone.

What the trailer does focus on is stealth, which is being retained as a crucial part of the strategy gameplay. Your squad will be able to cloak themselves before battle, letting you place them carefully around a map before engaging enemies. You won't, however, be exploring the world freely between these combat scenarios anymore, with Corruption 2029 sending you purpose-built missions instead.

The biggest shock is the release date however. Corruption 2029 is just days away, launching on the Epic Games Store on February 17 for $20. No other platforms have been announced yet.

Mutant Year Zero impressed us back in 2018, with critic David Wildgoose scoring it 9/10 in his review, saying, "Mutant Year Zero's clever focus on stealth and pre-combat preparation reward your diligence, its turn-based combat encounters are complex, and they help bolster its all-encompassing post-apocalyptic atmosphere. It is a superb tactical combat campaign that you shouldn't let sneak past." 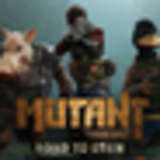