Musou Orochi 2 breaks out in December for PS3

The last time gamers got to play as characters from the Dynasty Warriors and Samurai Warriors series in the same title was with Warriors Orochi and Warriors Orochi 2 back in 2007 and 2008, respectively. Four years later, Tecmo Koei has now announced the next title in the crossover series: Musou Orochi 2.

According to a recent issue of Famitsu (via Andriasang), players can expect to control heroes from both franchises in new levels set in both the Romance of Three Kingdoms and Sengoku historical periods. The game has a scenario creator where players can make and upload custom stories onto the game's servers for other users to download and rate. Gamers will also be able to fight with 120 different characters.

The game will be out on the PlayStation 3 this December. However, an Xbox 360 version has yet to be confirmed. Readers should note that the translated title of this game should not be confused with the already-out Warriors Orochi 2, as that version was originally titled Musou Orochi Maou Sairin in Japan. 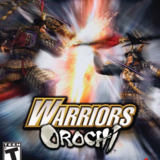