Murder Mystery Game Overboard Has Surprise Released, You Can Play It Now

Inkle Studios, the creators of 80 Days, have surprise released Overboard, a "whodunnit where you’re the one whodunnit."

What started out as an April Fools joke is now a full-fledged game. Inkle Studios, the creators of 80 Days, have surprise released Overboard, a visual novel "whodunnit where you're the one whodunnit." In a press release, Inkle describes Overboard as "80 Days meets Agatha Christie with a wicked twist," the murder mystery is available now on PC, Switch, and Apple devices.

While the game's release comes as quite the surprise, news of Overboard actually first surfaced back in April, when Inkle co-founder and narrative director Jon Ingold joked about the studio releasing a game about a "multiple murderer who hate dolphins and talks to God."

In Overboard you take on the role of Mrs. Veronica Villensey, a very recently widowed starlet and heiress who has eight hours to cover her tracks and frame someone else for the murder of her husband. While pinning the blame on someone else is no easy feat, there are plenty of ways to go around it, with the press release stating the game is "designed for multiple playthroughs with an enormous amount of variety and consequence." Apart from antagonistic dolphins, the game features a cast of colorful characters that move around in real time, each with their own secrets you can discover and use against them. According to Inkle, "anyone could be a witness, [and] anyone could be the next victim."

Made in just 100 days, Overboard is Inkle's fifth game and follows the company's pattern of creating narrative-driven titles such as 80 Days, a game Hope Corrigan called a "wonderfully imaginative and vivid steampunk world presented through beautifully-told narrative" in GameSpot's review. For those ready to take on the role of black widow and try to--quite literally--get away with murder, you can pick up Overboard on the Nintendo eShop, Steam, GOG, and the App Store for $15 USD. 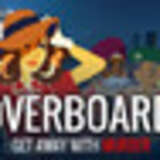