Midway Games has shipped Muppet Race Mania for the Sony PlayStation. In the game, players can race as one of over 30 popular characters such as Kermit, Miss Piggy, Gonzo, and Animal through six sets of courses based on the six Muppet movies. The game's cutscenes feature clips from the films.

"Muppet Race Mania brings the popular and wacky antics of the Muppets alive in an action-packed video game adventure," said Helene Sheeler, vice president of marketing, Midway. "Muppet fans of all ages can now enjoy their favorite characters in an entirely new and entertaining format."

Muppet Race Mania will be followed by the release of Muppet Monster Adventure later this month. The games were developed by Traveller's Tales in conjunction with Jim Henson Interactive. 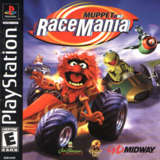