Moving Out Is Like Overcooked With Furniture, Releases In April

Out of the pot and into the...living room?

If you've been enamored with Overcooked and its hilarious co-op antics, Moving Out is here to scratch that same itch. Toss out the pots and pans and replace it with sofas and carpets, because it's time to move this April.

Moving Out is launching on Nintendo Switch, Xbox One, PS4, and PC on April 28, with a new gameplay trailer showing off the ridiculous stages you will need to navigate through to reach your moving van. Sometimes the van is simply waiting outside, other times you're trying to load it while on another moving truck, and other times you're working your way through a pristine laboratory with rotating doors.

Why? Who knows, but it sure looks like the same sort of messy co-op fun that has made Overcooked a real hit as a casual party game. There will be over 50 levels for you to tackle at launch, each of which can be play alone, in pairs, or with a total of four players.

If you missed Overcooked and its recent sequel, and don't understand what all the fuss is about, check out Kallie Plagge's 8/10 review of Overcooked 2, in which she called it "one of the best couch co-op games around." 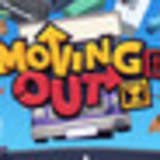