With GameSpot's own nigh, Evolution Studios has announced a free auto-update to its PlayStation 3 off-road racer. Beginning June 7, vehicular combatants in Sony Worldwide Studios president Phil Harrison's favorite racing game will have access to the update, which introduces a time attack mode. The new mode lets players chase up to seven ghost versions of themselves, or download and race against the best laps recorded by others from a worldwide leaderboard.

Another new feature introduced by the update is an automatic race-video upload feature. Notably speedy trips of one's own will automatically be uploaded to a global leaderboard, and your record laps can be downloaded by others around the world to compete against. The MotorStorm patch will also include several other minor bug fixes and game enhancements, such as a game list improvement, host identification, and the expansion of buddy lists to up to 50 people. 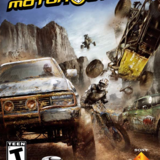