The sequel to Polyarc's PSVR hit was revealed during the new State of Play presentation.

The heroic mouse Quill is returning for more virtual reality adventures as Polyarc has announced Moss Book II for PlayStation VR during the July 8 State of Play.

A brief trailer showed Quill traversing multiple new locales--one featuring icy terrain and another sporting a steampunk-style look--while fighting enemies both new and old with some brand-new weaponry, including a giant hammer. The game also confirms the player will once again control a ghost-like figure, guiding Quill through each level and using a small floating orb to help solve puzzles.

The official press release for the game confirms that Book II takes place directly after the first game, noting that "Quill’s adventure is far from over" and mentioning "a greater danger from those who seek to unmake the world we’ve grown to adore." No specific release date was included in the release nor the trailer, only a mention that the game is "currently in development."

The first Moss adventure first launched for PlayStation VR in February 2018. GameSpot's review of the game scored it a 8/10, calling it "a platformer that isn't just full of charm and surprises, but one that wouldn't feel at home outside of VR."

For more State of Play announcements, check out our coverage of Death Stranding: Director's Cut's release date and the brand-new IP from Illfonic Studio, Arcadegeddon. 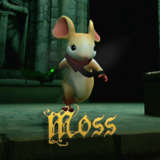