Midway takes the wraps off its new action adventure entry in the Mortal Kombat series.

For a franchise as long-lived as Mortal Kombat, the series has rarely branched outside the one-on-one fighting action that made it popular in the first place. That single-minded focus will soon change, however, when Midway releases Mortal Kombat: Shaolin Monks, the first nonfighting action game to bear the infamous dragon since MK Mythologies: Sub-Zero and Mortal Kombat Special Forces, released in 1997 and 2000, respectively. We're pleased to bring you the first screenshots from and information about Shaolin Monks, which is scheduled to be released late next year on the PS2 and Xbox.

Few hard details have been revealed so far about Shaolin Monks' gameplay or setting--the game seems to be a brawler-style action game, and it's a pretty safe bet that we'll be seeing plenty of places and faces from previous MK fighting games in this new action adventure. Mortal Kombat fans will notice Liu Kang, Kung Lao, Mileena, and the recently returned Baraka in the new screenshots, not to mention backgrounds like the portal and the tower from Mortal Kombat II. Interestingly enough, some screens show several Baraka-like characters fighting at one time. Perhaps we'll finally get some more background on Baraka's often-discussed race of Outworld mutants as Shaolin Monks' storyline unfolds.

The game will have both single-player and cooperative modes, and though the number of simultaneous players hasn't been revealed, it's worth noting that the screenshots don't seem to contain more than two classic characters onscreen at any one time. Like the recently released Mortal Kombat: Deception, Shaolin Monks will contain many backgrounds with interactive features like spiked ceilings, acid pits, and living trees (we appreciate the many nods to MKII that are apparently being included in the game). And of course no Mortal Kombat game would be complete without a host of gory new fatalities.

The Mortal Kombat franchise seems to be coming back in a big way, and Shaolin Monks looks like it will help to flesh out the universe even further while providing a new gameplay experience for hardcore fans. Check out our news story for the full details of the announcement, and stay tuned for more in the coming months. 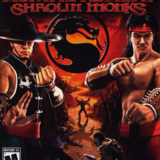