NetherRealm Studios announces free-to-play mobile game, WWE Immortals, though we don't know much about it.

Due to launch worldwide in 2015, WWE Immortals is coming to iPad, iPhone, iPod Touch and Android devices. Unfortunately, WWE and Warner Bros. aren't sharing many details about the game. All we know is that it will "feature epic Superstar battles in a fantastically re-imagined WWE world."

WWE and Warner say further details, including information about gameplay features, will be announced sometime ahead of WWE Immortals' release next year. We also don't have any images or video to look at, so the picture of gamer-guy Big Show above will have to do for now.

In addition to WWE Immortals, NetherRealm is working on Mortal Kombat X, which will be released for consoles and PC in 2015. 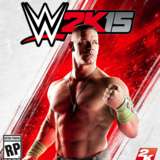