Half-Minute Hero among the three new Xbox 360 games that can now be played on Xbox One.

The latest batch of Xbox One backward-compatible games is now available.

A total of three more Xbox 360 titles can now be played on Xbox One. These include the excellent Half-Minute Hero: Super Mega Neo Climax, Flock, and… Tour de France 2009, which features a pre-steroid-scandal Lance Armstrong on the cover. The timing of this release seems somehow appropriate in light of recent doping allegations ahead of this year's Olympics.

Like other Xbox One backward compatible games, any supported digital games you own can be downloaded from the My Games and Apps' Ready to Download area. Physical copies are playable by popping in the disc and downloading an update.

The feature saw a major addition recently when support for Red Dead Redemption was introduced. You can check out a full list of every backward-compatible game on Xbox One here. 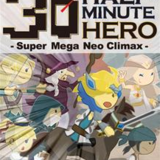