Three new brain-training titles are announced for UK gamers, including a PSP version.

Encouraged no doubt by Dr. Kawashima's decent stint in the top-selling charts, three new intelligence-testing games have been announced for the UK and Europe. Two of them, published by 505 Games, target the already well-served Nintendo DS platform, while a new title overseen by Dr. Kawashima himself will hit the PlayStation Portable.

The DS titles, The Professor's Brain Trainer: Logic and the Professor's Brain Trainer: Memory are both scheduled for a winter release in the UK and will feature a series of activities including simple math problems, drawing pictures, reading out loud, and playing Sudoku puzzles. The games are designed to be used for a short time each day as a form of "mental exercise"--the sort of games that have proven to be popular among a far wider demographic than traditional games.

The two latest titles were developed under the guidance of Dr. Makoto Shichida, a brain and neurology professor at the University of Newport, Japan. The Professor's Brain Trainer: Logic will focus on logic problems, mathematical ability, and concentration, whereas The Professor's Brain Trainer: Memory claims to improve players' memories with a series of visual association and concentration minigames. Each game will have five different difficulty levels and themes.

Ubisoft is also helping the mind game craze on its way with a new title for the PSP, called Mind Quiz, created under the supervision of Dr. Kawashima. It will be released in Europe next month and will also feature online gameplay elements with a challenge mode. 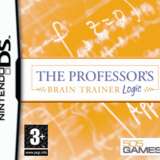