Minecraft studio Mojang and The Elder Scrolls publisher Bethesda have settled the trademark lawsuit over Scrolls, Mojang has announced.

Mojang managing director Carl Manneh announced the news on the company website this weekend, saying "We have settled the lawsuit over Scrolls, and Mojang and Bethesda are friends again."

As part of the deal, Mojang's forthcoming title Scrolls will be allowed to keep that name, but it must surrender the Scrolls trademark to Bethesda.

"For us, this was never about a trademark, but being able to use Scrolls as the name of our game, which we can," Manneh said.

Mojang founder Markus Persson shed further light on the matter, saying on Twitter that in addition to the above, Mojang has agreed to not make an Elder Scrolls competitor using the Scrolls name.

The court case erupted in August when representatives of Bethesda parent publisher Zenimax contested that Mojang was infringing on a trademark of the Elder Scrolls series with its upcoming game, Scrolls.

Bethesda has not chimed in on the proceedings through official channels, and as of press time, the publisher had not responded to GameSpot's request for comment. 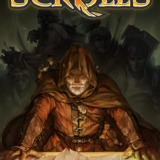