[UPDATE2] Activision authenticates leaked video as showing optional sequence where gamers can participate in slaughter of unarmed civilians in an airport.

1136 Comments
Where to buy
Call of Duty: Modern Warfare 2
There are no available deals for this platform
$31.40 at Amazon
$0.00 at Amazon
GameSpot may get a commission from retail offers.

EDITOR'S NOTE: This story has been updated at the bottom.

SPOILER WARNING: The story below contains information that reveals major plot details about Call of Duty: Modern Warfare 2. The game's developer, Infinity Ward, is recommending a total media blackout for those who wish to play the game without any prior knowledge of its story. 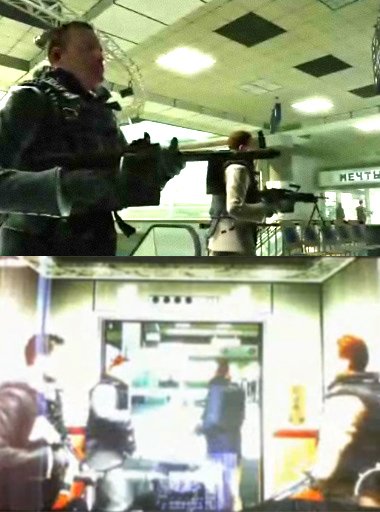 Source: Leaked video viewable (for now) on CNN's user-submitted iReport section and on Mapmodnews.com. The same video has been pulled from YouTube "due to a copyright claim by Activision Games Inc," indicating its authenticity.

What we heard: In every trailer released for Modern Warfare 2--including the almost image-free teaser released at the 2009 Game Developers Conference--one event has loomed large. Each trailer depicts a group of Russian ultranationalist terrorists massacring civilians at an airport with assault weapons.

Now, footage has leaked that appears to show the game will indeed depict the massacre, reminiscent of last year's mass killings in Mumbai, India, which left nearly 200 people dead. In a move sure to ignite controversy, the footage indicates the game will cast players as one of the killers, having them shoot civilians en masse from a first-person view.

Several sites have posted footage showing the same group of five terrorists (including the player), wearing body armor over business suits, as has been shown in every trailer for the game. (See screen comparisons, which have leaked, lower-resolution footage on the bottom.) The killers first emerge from an elevator, as the sound cues in the very first trailer portrayed. Once out, they open fire indiscriminately into a crowd by the security lines before moving up a series of body-draped escalators shown in the "Infamy" trailer released earlier this month. 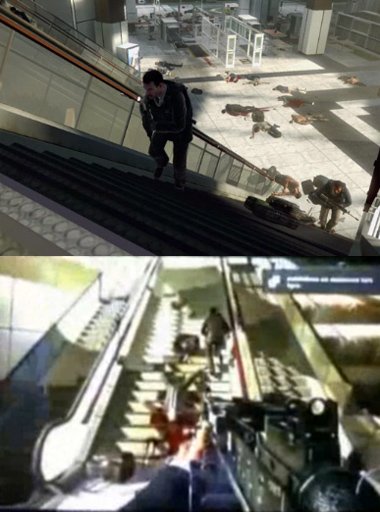 From there, the terrorists move through a shopping level--with the player dispatching wounded civilians squirming on the ground--before moving down another escalator. Then, the scene shifts to the airport's tarmac where they encounter a group of security personnel under a large passenger jet with red, white, and blue stripes. The same jet appears to be shown in the "Infamy" trailer but from the opposite viewpoint of the security personnel moving to stop the killings.

At that point, the leaked footage ends. However, despite being of low quality, the footage bears several telltale signs that indicate it is authentic--or an extremely elaborate mod. First is the fact the terrorists shown look identical to those in the last two official Modern Warfare 2 trailers. Second is the fact the blurry subtitles appear to show the name "Makarov"--the last name of the game's primary antagonist, Vladimir Makarov.

Third is the onscreen heads-up display, which appears to be the same as that in preview versions of the game shown to the press. Fourth are indications that the footage came from the same European source that posted video of a third-person multiplayer mode in Modern Warfare 2. Reflections on the screen showing another monitor and PlayStation 3 menu cues are the same as footage that appeared on YouTube before being pulled.

That same yanked third-person footage was confirmed as being legitimate in Twitter postings by Robert Bowling, director of communications for Modern Warfare 2 developer Infinity Ward. In a tweet today, Bowling also indicated that footage from the game's campaign had leaked out. In response to a message from a user asking "Do you think the leaked SP footage is too much?" he responded, "I know man. Media Blackout! I'll keep this Twitter feed and the official Infinity Ward YouTube spoiler free. Singleplayer leaks suck." 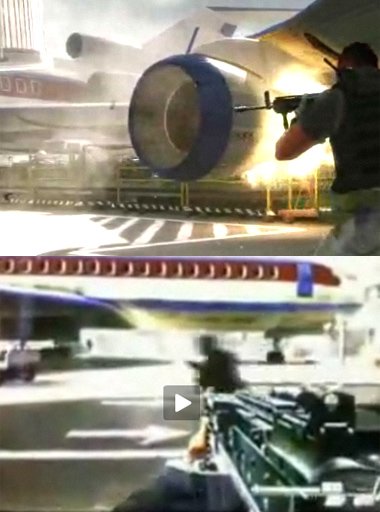 Interestingly, the footage shows a multiplayer icon over another terrorist's head, indicating the level could be played in the game's Special Ops co-op mode. One rumor circulating is that the player will be an undercover operative who is forced to participate in the massacre or blow his cover.

The official story: Reps for Modern Warfare 2's publisher, Activision, had not responded to requests for comment as of press time.

Bogus or not bogus?: Not bogus. Infinity Ward is known for taking major risks to surprise its audience, and comparisons between official Modern Warfare 2 trailers and the leaked footage leave little doubt of the latter's legitimacy.

The bigger question is will the sequence impact Modern Warfare 2 sales? Sure, players can commit similar mass killings at any time in almost every Grand Theft Auto game. However, the brutal nature of the airport massacre and the ever-sensitive subject of terrorism might prove a toxic mix, in terms of publicity, if the mainstream media decides to pounce on it.

[UPDATE] Though US Activision reps remain mum on the matter, a UK spokesperson confirmed the leaked footage as authentic to game site VG247. The spokesperson also offered the following statement from Activision:

"The scene establishes the depth of evil and the cold-bloodedness of a rogue Russian villain and his unit. By establishing that evil, it adds to the urgency of the player's mission to stop them."

"Players have the option of skipping over the scene. At the beginning of the game, there are two 'checkpoints' where the player is advised that some people may find an upcoming segment disturbing. These checkpoints can't be disabled."

"Modern Warfare 2 is a fantasy action game designed for intense, realistic gameplay that mirrors real life conflicts, much like epic, action movies. It is appropriately rated 18 for violent scenes, which means it is intended for those who are 18 and older." (The BBFC 18 rating in the UK is the equivalent of M for Mature in the US.)

[UPDATE2] Activision US has now issued the following statement. "The leaked footage was taken from a copy of game that was obtained illegally and is not representative of the overall gameplay experience in Modern Warfare 2. "

"Infinity Ward's Modern Warfare 2 features a deep and gripping storyline in which players face off against a terrorist threat dedicated to bringing the world to the brink of collapse. The game includes a plot involving a mission carried out by a Russian villain who wants to trigger a global war. In order to defeat him, the player infiltrates his inner circle. The scene is designed to evoke the atrocities of terrorism. "

"At the beginning of the game, players encounter a mandatory 'checkpoint' in which they are warned that an upcoming segment may contain disturbing elements and they can choose not to engage in the gameplay that involves this scene. Consistent with its content, the game has been given an "M" for Mature by the Entertainment Software Ratings Board. The rating is prominently displayed on the front and back of the packaging, as well as in all advertising."