We enlist with both the Zeon and Federation forces in our look at this giant-robot PS3 game.

In some ways, any Mobile Suit Gundam game is going to have a tough time of it in America. Certainly there is a hardcore contingent of US fans who are familiar with Gundam lore and history but, when compared to Japan--where the Gundam series has been described as that country's Star Wars--it seems as though the series will have an uphill battle in the US market. Fortunately, that hasn't stopped the folks at Namco from making Mobile Suit Gundam: Crossfire a launch title for Sony's upcoming PlayStation 3 console. For good reason too, because as we discovered during our hands-on time with an updated build of the game, the appeal of giant robots blowing stuff up knows no borders.

Those who are into the Gundam fiction continuum might be surprised to learn that Crossfire will have a slightly different spin on the world, as compared to older Gundam games. Though fans might recognize the names of certain characters from the anime series in the game, there won't be long cutscenes of canon-specific minutiae to wade through. Instead, when playing Crossfire, you're cast as a lone soldier recruited to fight on either side of the war. You begin the game by choosing a side--either the Federation (the folks who are protecting Earth from invasion), or the Principality of Zeon (a group who declared independence from Earth's rule, migrated to outer space, and are now hell-bent on overthrowing the Federation rule on their home planet). As you will discover across each faction's 15 missions that make up the game's campaign, neither side in the conflict is inherently good or bad, and both have their own motivations behind the war.

That same grittier, more realistic tone applies to the game's visuals, too. Gone are the clean, cartoonish, bright-blue and pearl-white Gundams of the past. Well, technically, the game's huge lineup of mech models will probably feature models that series' fans will recognize, but when rendered on the PS3, they take on a far more realistic, even dirty, appeal to them. Scratches in the paint jobs, dinged metal, and the overall dusty, grimy world of the battlegrounds lend this game quite a different visual style than the austere look folks might be used to.

The realistic approach continues with the combat itself. We've written before about the location-specific damage in Crossfire, and it's cool to see it in an even more polished version of the game. Blow off a Gundam's arm, for example, and it won't be able to use the shield or weapon it was holding. Shoot off its head and your opponent might be able to see, but its radar won't function any longer. As a side note, just because you are incapacitated doesn't mean you're down-and-out. If you lose your weapon arm, for example, you can always drop your shield, pick up a weapon, and continue the fray. Even if you lose both arms, you can still keep fighting with some well-placed kicks to your opponents. In essence, you're only done for in Crossfire when your mech finally gives up and explodes.

One of the limiting factors in combat is how quickly you can run out of ammo if you aren't careful. Even heavy guns with lots of ammo can run down once you begin shooting at everything that moves. To replenish your stores, you can retreat to various supply tents found on the map. It takes some time to refill your ammo and you can be attacked during restocking, which is another nice touch. Even cooler: Supply stations are completely open for enemy attack--so one effective technique for crippling your foe will be to take down his supply tents and then swoop in for the kill.

Of course, it's not all about ranged weapons in Crossfire, as Gundams will be able to wield melee weapons such as laser swords and beam axes, which are perfect for finishing off foes when they're hurt. Getting up-close and personal with opponents can be a chore thanks to the wide-open nature of the maps in Crossfire and the relatively slow pace of the Gundam's movements, but your mech's boost rockets will help you close the distance quickly. Different mechs have different boost capabilities--some will be able to boost for only a few seconds, while others will be able to practically fly, having longer, more powerful boost rockets installed.

Controls in the game are friendly for the most part. You move your mech with the left analog stick, and control the camera with the right. Attacking with melee weapons, guns, and boosts is controlled with the face buttons. Because the camera is so flexible, you'll make liberal use of the L1 button to lock onto opponents for both melee and ranged combat. If your weapon has a scope on it, you can zoom in for some long-range sniping by pressing the R2 button, then using the analog sticks to aim your shot and zoom in or out.

As you make your way through the campaign in Crossfire, you'll engage in combat in a variety of different settings, from the dusty Australian outback to the dense jungles of Southeast Asia. And even though your Gundam will typically tower over the tree line, the varied elevations in the battle maps mean that there will still be plenty of opportunities for enemies to sneak up on you. Battle objectives on different maps will change accordingly--in some cases, it's up to you to take out all the enemies out there, and in others, you'll be hopelessly outnumbered, and your goal will be to incapacitate as many enemy forces as you can. We played one mission later in the game that had us not only protecting our own base and supply depots, but invading the enemy stronghold with a number of squadmates. You'll pick up wingmen as you go through the campaign and will be able to assign your fellow pilots to mechs before a mission, and you can give them orders in the field after the mission has begun. In fact, once you've completed the campaign for one faction and then restart the game as the other side, you'll be able to use your older mechs in the game, even if they come from the opposing side.

As you go through missions, your units will take damage, and in between missions you'll need to repair your mechs. A unit in repair is not available to you for a mission, but you'll pile up so many mechs by the end of the game that you probably won't have trouble finding a suitable one for your mission. Before a mission, you can outfit your Gundam with various weapons, and you can even choose an overall mobile suit "type" based on the terrain you'll be fighting on. There are a number of to choose from including heavy, jungle, desert, and marine. Customization and repairs will cost you money in the form of postmission points you earn, as well as the time it will take to repair the mech.

With a straightforward storyline, a gritty, realistic look, and, of course, lots of giant-robot destruction, Mobile Suit Gundam: Crossfire is looking to be a solid addition to the PS3 launch lineup. We'll have a full review of the game when it, and the console, launches, so stay tuned. 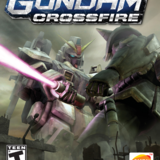