We take a look at this upcoming team-based vehicular shooter.

Combining vehicle combat with first-person action is a natural progression for action games with even vaguely military themes. It's a rare war movie that doesn't have jeeps or trucks somewhere in the picture, since it's hard to expect lead characters to hoof it in every scene. But there's a short list of recent first-person shooters that have managed to add vehicles to the mix. Tribes 2, Halo, and Operation Flashpoint are the only ones that stand out, and Halo isn't even on the PC yet. Mobile Forces, from UK-based Rage Software, is a game focused on rectifying this deficit, adding vehicles and large environments to the Unreal Tournament formula.

Mobile Forces bears more than a passing resemblance to Unreal Tournament. Rage licensed the Unreal engine for the game, and included some of the engine's more recent features, such as support for rolling terrain. However, the detail level of the graphics looks much more like the original UT than the upcoming Unreal Tournament 2003. Although basic deathmatch is included, Mobile Forces is a multiplayer team game at its core. The teams are divided into rather generic red and blue sides, and since the single-player game is limited to playing against bots, there's no story or setting except what you can discern from individual maps. The weapons and vehicles may be inspired visually by familiar military equipment but, fitting with the game's fast-action style, there's little attempt to model real-world specifics.

A basic inventory system limits how many of the game's six weapons and four items you can carry at a time. Every player has six inventory slots, and weapons take up one to five of these, balanced by the weapon's power. The bulkiest weapons are understandably the machine gun and the rocket launcher. The rocket launcher has more or less a single purpose: to stop vehicles in their tracks. The slow reload and 10-shot magazine keeps it specialized. The machine gun is even bigger than the standard-issue M60 .50 cal seen in any number of games, and can't be fired unless it's set down on its tripod. This static gun can dish out a ton of damage at close range, and is one of the better choices to take out vehicles. The four anti-personnel weapons are obvious choices--semi-auto pistol, assault rifle, shotgun, and sniper rifle--and work pretty much as you'd expect. To keep the sniper rifle somewhat balanced, there's a laser sight that gives away the sniper's position, and sniper shots are most effective when you hold down the fire button for some time.

The game's diverse environments mean that it's useful to have more than one weapon, but the items share the same limited inventory space, so you can't have everything. In addition to basic armor and a portable health kit, you can choose from a frag grenade or trip mines. Not only do the trip mines have a laser wire to make them good for closing off narrow corridors, but they have an alternate mode that lets you throw them on the ground to slow down vehicles.

What makes Mobile Forces interesting is its vehicles. Obviously, a lot of effort is going into the vehicle physics. The fast vehicles, the dune buggy and humvee, feel like they're straight out of an arcade-style driving game, and it's fun just to drive them around the levels. The bouncy suspension is quite forgiving and a number of maps have ramps and obstacles that you can jump off for some decent airtime. There's no vehicle damage for careening into obstacles or other vehicles, but tires can be shot out, which seriously affects handling. One of the more effective uses of vehicles is to mow down enemies in open spaces. Most troops are very vulnerable to oncoming vehicles, but the dune buggy and slow-moving covered truck leave the driver exposed to regular rifle shots, and all vehicles but the APC expose the passengers to small-arms fire. However, it's nearly impossible to run over a deployed machine gunner and survive. Direct damage to the vehicles, even the APC, seems to directly count down the driver's armor and health, so it's not just a matter of jumping out unscathed.

Since none of the vehicles have mounted weapons, their primary use is fast transportation around the larger of the game's 11 maps. Even the dune buggy can include one passenger and a whole squad can jump in the covered truck. Some of the maps use the terrain engine to be so large that you'd never want to attempt running from one base to the other, but many of them are more reasonably sized. The smaller urban environments often have a mix of small passages that let troops on foot cut a quick, circuitous route intended for vehicles. These urban maps include a typical mix of industrial environments, including a factory district, an area of waterfront warehouses, and an airport. One of the more interesting outdoor maps is the "western" map in the game's demo. Two deserted towns are at either end of a sandy desert canyon, and there's a fort in the middle to provide extra cover. This is one of the game's few very brightly lit maps; the few large night maps are so dark that you'll wish for some night vision goggles.

The single-player "missions" mode forces you to win a number of games on a given map to unlock the next, but a better way to learn the maps is simply to play some skirmishes against the bots. The eight different game types include plenty of uncommon options, which you might choose to practice offline. The most interesting of these is "trailer," in which teams fight to control a humvee pulling an explosives-laden trailer and detonate it in the opposing base. The lack of base defenses can make it a little easy to score once a team gets initial control, unless defensive teammates are well equipped to quickly take down a vehicle rushing in at top speed. Two other modes also focus on a single, central objective: detonation, in which there's one key that both teams fight over to trigger bombs in each base, and holdout, in which teams just try to capture and hold a central point for as long as possible. Other modes include safecracker, a variation on capture the flag in which you have to destroy a safe to get the gold inside, and captains, which designates a VIP target on each side, as well as standard deathmatch, team deathmatch, and CTF.

Mobile Forces plays like a major professional mod for Unreal Tournament, and it's good that there's plenty of variety to the gameplay, because on the graphics side it's not nearly as impressive. The generic red vs. blue formula hasn't inspired the developers to do much with the player models--both sides just have the same two models to choose from. Apart from the occasional amusing detail--like the attack sub poking out of the ice on one big artic map--the environments aren't eye-catching. And while the shift from first-person to third-person views when you jump in a vehicle is handled well, the vehicle camera is locked straight ahead so you have to deal with tunnel vision while driving.

As a variant to a primarily multiplayer game, Mobile Forces' success depends on its online play. Even though the game extends UT's decent team AI for the bots to use the vehicles, playing against bots in the single-player mode is of fairly limited interest. The preview version we played also showed that Rage still has some work to do in refining the bots. Vehicles are much more useful when passengers use them as mobile gun platforms, but the AI wasn't very cooperative in either jumping on nearby vehicles or in shooting at passing targets. And letting the AI drive for you doesn't seem very effective either. Mobile Forces has one thing going for it--vehicles--and that's promising enough that it may interest those looking for a Tribes-like game but who prefer the less-floaty feel of Unreal Tournament physics. Mobile Forces was recently released in Europe, and Majesco plans to release the game in the US this July. 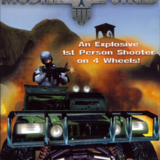