"I've found, when I play baseball video games, I do better."

Major League Baseball slugger Yasiel Puig of the Los Angeles Dodgers on Wednesday got two hits and drove in three runs, ending a hitting slump where he recorded just two hits in 24 previous at-bats. What helped turned things around for the MLB 15: The Show cover star? Video games, of course.

"I just stopped playing soccer video games," he said. "I've found, when I play baseball video games, I do better."

Puig didn't say which game helped him return to form, but we'd have to wager it was MLB 15: The Show, seeing as he is that game's cover star.

Also helping Puig break out of his slump was the fact that the Dodgers held a Yasiel Puig bobblehead night on Wednesday, when his mom also threw out the first pitch. According to Shaikin, Wednesday night was the second Puig bobblehead night at Dodger Stadium. In those two games, Puig has four hits in seven at-bats, including a home run, double, and four RBI.

"I'm going to ask the Dodgers to see if they can have some more bobblehead nights," he said. "And have my mom throw out the first pitch as much as possible." 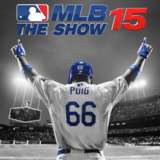