The Judge gets the cover in the US.

This year's MLB season recently ended, with the Houston Astros defeating the Los Angeles Dodgers to claim their first-ever World Series title. Baseball doesn't come back until April, but Sony is already getting ready by announcing the new MLB The Show game. MLB The Show 18 is on the way for PlayStation 4, and New York Yankees slugger Aaron Judge will be on the cover in the United States.

For the Canadian version of MLB The Show 18, Toronto Blue Jays pitcher Marcus Stroman is on the cover. You can see both covers below.

MLB The Show 18 launches on March 27 for PS4. Everyone who pre-orders a digital or physical copy gets 10 stands card packs and 1 legend card. Pre-orders at GameStop come with an extra five standard packs, boosting the number to 15. Those who pre-order through the PlayStation Store will get 5,000 stubs and the Aaron Judge rookie flashback card that can be used right away in MLB The Show 17.

Additionally, people whoo pre-order at GameStop or the PlayStation Store will let you play a few days early, starting on March 23. This is part of what Sony is is calling the First Pitch Weekend.

There are also going to be a number of premium versions of MLB The Show 17, including the All Rise Edition that is exclusive to GameStop and EB Games. This $100 edition of the game includes a 9Fifty snap back hat, along with a steel book case for the game. You also get lots of in-game goodies, including PS4 themes for all 30 MLB teams, among other things. The $100 Digital Deluxe edition, meanwhile, is exclusive to the PlayStation Store. It comes with almost everything in the All Rise Edition (but not the physical hat, of course), with one difference being 20 standard packs instead of 10.

The MLB The Show 18 MVP Edition, which costs $70, includes a steel book case and a number of digital extras such as 5,000 stubs, the MLB team themes, and more. Go to the PlayStation Blog to see a full rundown of the various MLB The Show 18 premium versions. 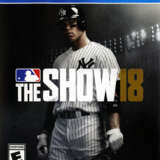