"Adrenaline-fueled" baseball game scheduled to take field this spring; Midway explains how it was able to make an MLB-branded game.

With spring not too far off, professional baseball players are returning to their teams for a Spring Training full of pinpoint precision pitching, gentle bunting drills, and hitting the cut-off man from the outfield. To Midway, however, spring is an opportunity to throw heat at opponents' chins, belt towering blasts into the parking lot, and run the bases with shoulders lowered and fists clenched.

Midway Games today announced that the Slugfest series will once again take the field after riding the pine last season. MLB SlugFest 2006 will be released this spring for the Xbox and PlayStation 2. Like seats in the nosebleed section, Slugfest 2006 is budget priced and will have a SRP of $19.99.

The 100 million-dollar question is: How is Midway releasing a MLB-licensed game when Take-Two Interactive (parent company of 2K Sports) holds the exclusive rights among third-party publishers to make MLB-branded baseball games?

When Take-Two announced its deal for MLB exclusivity, it said in no uncertain terms that it is the only third-party publisher that can make MLB-licensed baseball games. Nintendo, Microsoft, and Sony can make baseball games, but only for their respective consoles. The deal doesn't just cover simulation baseball games either; Take-Two specified that it included MLB games in the arcade and strategy genre as well.

[UPDATE] Midway contacted GameSpot today and cleared up the confusion with its licensing deal with the MLB. 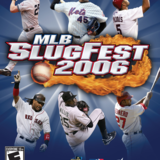