Fantasy baseball enthusiasts now have yet another reason not to sleep.

Just when you thought 2K's five Major League Baseball games (MLB 2K8, MLB Power Pros 2008, MLB Superstars, 2K8 Fantasy All-Stars, MLB Stickball) were as far as any developer could milk an exclusive license in the span of a year, 2K has provided yet another twist on America's pastime. MLB Front Office Manager, developed by Blue Castle Games, places the user in the role of general manager of a Major League Baseball franchise. We had a chance to break down all of the wheeling and dealing in this latest offering at 2K's press event earlier this week.

As its title suggests, FOM places gamers in charge of managing a professional baseball franchise with a level of control and complexity that will make the casual fan dizzy. Former player and current Oakland A's general manager Billy Beane served as a consultant on the development of the game to ensure as authentic a GM experience as possible. By 2K's own admission, the game targets a specific niche: the roughly 3.5 million participants of Fantasy Baseball leagues. It is 2K's hope that this hardcore baseball audience, many of whom spend two to three hours every day managing their fantasy rosters, will see FOM as a convenient alternative (or even a complement, assuming those individuals forgo sleep).

Your employment as GM begins with the typical character creation features. In addition to aesthetics, though, FOM allows you to assign points to various disciplines such as scouting and player negotiation, and even allows you to select from a number of backgrounds such as a lawyer, former player, or talent scout. Combined, your disciplines and background will affect the facets of a GM's profession in which you'll excel. As you continue your career, success as a GM will earn you points to further increase your disciplines. Likewise, bad decisions will result in a regression of your disciplines and will eventually lead to your dismissal as GM. Of course, with 29 other teams to ruin, chances are that another franchise will offer you a second chance.

FOM features a brand-new engine designed to create a simulation realistic enough to satisfy even hardcore fantasy baseball enthusiasts. In contrast to other simulation engines that factor only player attributes to determine results, FOM utilizes actual stats compiled over the player's career to drive its simulation. This includes factors such as a batter's historical success versus that of a particular pitcher, how effective a pitcher is at high pitch counts, and success with runners in scoring position. As baseball fans are naturally attracted to statistics, FOM includes a level of statistical analysis that could rival most sports Web sites. Various splits are available to track player performance in particular months, home or away, and versus Right- or left-handed pitchers, all of which affect gameplay. If you can imagine a metric, it's probably in the game.

The statistics don't stop with current major league players, either. FOM includes five levels of minor league teams associated with your franchise ranging from AAA ball down to short-season players. Although the actual names of these minor league players can't be used, these players are otherwise accurate representations of the real thing.

Based on the depth of statistics, you can probably guess the level of off-the field depth in the FOM. As GM, it will be your task to engineer trade offers, develop scouting pipelines, negotiate player contracts, and oversee the development of your young talent. You will need to balance your zeal for trading with the effect trades may have on team synergy and player morale. In an additional twist, AI-controlled GMs will have their own agendas and it will be up to you to evaluate their mind-sets when proposing offers. FOM includes multiple levels of player arbitration and even includes a "Japan bidding" phase where franchise can bid for the right to negotiate with some of Japan's top talents. In addition to an offline career spanning 30 seasons, you can even pit your GM skills online against up to 29 other players in an online dynasty.

Although only the most hardcore fans may be able to stomach numerous seasons of watching every pitch, FOM's simulation engine includes a full 3D presentation including accurate in-game player models and stadiums. Fortunately, the simulations play out faster than a typical baseball game, with all of the annoying plate pauses and commercial breaks removed. According to the developer, without user interference, a game will typically play out in about 10 to 15 minutes. While this is an option, you will also be able to call the shots when you choose. You have the option to call down to the dugout and direct intentionally walking batters, make a bullpen changes, call for steals and bunts, and alter defensive personnel and alignments. But you won't have the ability to select specific pitches.

As you may imagine, FOM's interface is menu heavy, providing access to the various statistical metrics and trends to keep you apprised as general manager. What is surprising is that FOM manages to bring this depth to the console as well as the PC. While other console-based franchise management titles have struggled to create effective navigation tools, FOB's vertical menu interface is both clean and intuitive without compromising the depth one would expect from a game in this genre. Top-level categories include submenus (many of which include further submenus) similar to navigating a sports Web site. To help you sort out the complexities of running a Major League franchise, an e-mail feature is provided to keep you appraised on the goings-on around the league.

2K's Front Office Manager should provide hardcore baseball fans, especially those who participate in fantasy leagues, with an engaging and authentic experience in the life of an MLB GM. MLB Front Office Manager is due out in January on the PlayStation 3, Xbox 360, and PC. Be sure to look out for additional information on the game as we approach its release. 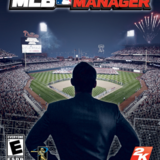