Though the future of Take-Two's Sports label has been called into question due to recent acquisition advances by rival Electronic Arts, the publisher isn't holding off on announcing new games from the division. As first sleuthed out on the Entertainment Software Rating Board's online database in January, 2K Sports officially took the wraps off of Major League Baseball 2K8 Fantasy All-Stars, which will be arriving exclusively for the Nintendo DS this April.

Capitalizing on 2K's exclusive third-party rights to the MLB license, developer Deep Fried Entertainment has loaded the game with the starting lineups of all 30 Major League Baseball clubs. However, fantasy gamers will be able to customize their rosters to create their own unique teams and then play in a variety of exotic North American locales, including Florida's Everglades and "the Frozen North."

Fantasy All-Stars will heavily incorporate the DS's touch-screen controls, allowing players to swing, pitch, field, and base run by using the stylus. Gamers will also be able to compete in a variety of modes, including exhibition matches or fantasy pennant mode, as well as an All-Star training minigame compilation. The game also features both local and online head-to-head multiplayer action. 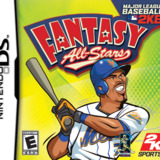