Midway's first all-new Mortal Kombat installment on the Xbox 360 and PS3 throws down against comic foes next month.

It has been a dubious proposition from the beginning. How can Midway make a new Mortal Kombat game that lacks the franchise's seemingly requisite guts, gore, and excruciating executions? Today, Midway revealed just when gamers will learn the answer to that question, saying that Mortal Kombat vs. DC Universe will arrive for the Xbox 360 and PlayStation 3 in North America on November 16, with the European release following on November 21.

The reason for the T for Teen rating, of course, stems from Midway's partnership with DC Comics. Despite that rating, creator Ed Boon assured GameSpot in an interview that Mortal Kombat's first all-new appearance on the 360 and PS3 would retain the franchise's signature brand of hyperviolent fighting.

In all, MK vs. DC Universe will include 22 fighters, 11 from each brand. To complement Midway's lineup of bloodied soldiers, such as Scorpion, Sub-Zero, and Raiden, DC will lend a number of its prize fighters, including Superman, Batman, and The Joker. And to help explain exactly how the MK and DC universes became intertwined, Midway has signed on comic scribes Jimmy Palmiotti and Justin Grey to write the game's story.

For more on MK vs. DC Universe, check out GameSpot's previous coverage. 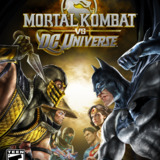