After months of making progressively grimmer headlines, Midway Games today had some much-needed positive news. The Chicago-based publisher announced this morning that Mortal Kombat vs. DC Universe has shipped 1.8 million copies worldwide since its release last November. The decently reviewed game is available for the Xbox 360 and PlayStation 3 in both a regular version ($59.95) and a "Kollector's Edition" ($69.95). (Note: GameSpot originally reported the game sold 1.8 million copies, and regrets the error.) 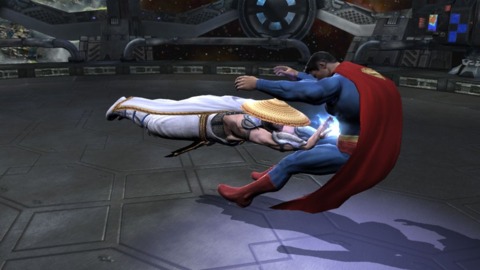 "Mortal Kombat vs. DC Universe was the result of countless hours of hard work by many people, and seeing the game surpass the million-seller plateau makes it worth all the effort," said Mortal Kombat creative director Ed Boon in a statement.

Then, the developer announced that work has begun on a follow-up. "We're already hard at work on our next version of Mortal Kombat, and look forward to being able to reveal more details in the future." It was unclear if the game in question would be a direct sequel to the T-for-Teen-rated MK vs. DC series or an original installment in the normally M-for-Mature-rated franchise.

Today's sales report comes none too soon for Midway, which has been staring down the barrel of a financial gun since last December. That's when the company revealed it had until mid-January to pay off $150 million of $240 million in outstanding loans. Earlier this month, it got a reprieve, with a first and second group of creditors agreeing to repayment deadline extensions.