We check out Atari's upcoming stealth action game based on the Mission Impossible franchise.

Mission Impossible: Operation Surma is the upcoming third-person action stealth game from Atari and developer Paradigm Entertainment. The game continues the adventures of Ethan Hunt, secret agent and all-around adventurer. This latest entry in the Mission Impossible franchise draws on core elements from the movie franchise, specifically its characters, but, with no movie tie-in, it's free to offer players an original adventure. We had a chance to try out PlayStation 2 and Xbox versions of the game to see how Ethan's latest adventure is shaping up.

The last time we checked in with Ethan Hunt, he and his team had once again thwarted evildoers and kept the world safe. Operation Surma catches up with the agent as he takes on a new assignment. The stakes are impossibly high in Ethan's latest adventure, as the evil Surma Corporation is scheming to take over the world's computers, which not only threatens national security but also affects everyone's ability to surf for porn on the Internet. What this means in gameplay terms is that you'll be working your way through more than 20 levels set in six different environments throughout the world.

The game's basic structure is pretty standard for a stealth action game. Each level will open with you receiving an assignment and heading out to do your business. The game ramps up the difficulty quite nicely with straightforward single objective tasks in early levels that are populated by a sparse complement of guards. As you get deeper into your assignment, the action becomes much stickier with all manner of security devices, security forces, and other hazards getting in your way. However, as daunting as it all sounds, Ethan's one capable dude, thanks to a robust move set that's a blend of Sam Fisher and Solid Snake. Ethan's also got a boatload of gadgets and, as always, he has a little help from his friends.

The stealth mechanics in Mission Impossible should be familiar to anyone who's played Splinter Cell. You'll see a small icon in the top portion of the screen indicating how well-hidden Ethan is. If the silhouette isn't completely empty, there will be a slight chance that a guard will detect you. You'll basically have to use objects and shadowy spots in the environment to hide from guards.

If you should happen to encounter a guard who's getting a little too close for comfort, then the game offers you a nice variety of ways to deal with him. You can end the confrontation quickly by simply shooting him, or you can sneak up on him, put him in a choke hold, and either snap his neck or simply hit him over the head. As in Splinter Cell, you can hide the body by picking it up on Ethan's shoulders and moving it to a more secluded area. If you happen to encounter a camera, then the only option is to really shoot--unless you're sure you can avoid it. Ethan has a special set of darts that allow Luther to hack into security cameras and render them useless as well.

Other items in the game include a grappling hook, an electronic lock pick, and a wasp. The grappling hook is probably the most-used gadget, since Ethan will often have to use it to avoid certain obstacles and/or to avoid detection while gently hanging above the floor. The electronic lock pick is pretty straightforward: It can open most locked doors. The wasp is like a minihelicopter that Ethan can pilot into heavily guarded or monitored areas. However, the wasp can fire only one taser blast before it becomes completely useless.

A lot of the items come into play for specific situations or puzzles. One puzzle requires Ethan to use his grappling hook, in conjunction with his pipe-crawling ability, to navigate through a series of laser grids. Another puzzle requires a special device that deactivates a large machine for a brief period of time so Ethan can climb in and complete his objective.

When gadgets won't cut it, you'll get help from the other members of the IMF team. Some, like computer expert Luther Stickell and transport specialist Billy Baird, should be familiar to anyone who's seen the films. (On a film-geek side note, Ving Rhames' likeness and voice are used in the game to bring Luther to life.) You'll also be joined by two new faces, professional con artist George Spelvin and weapons specialist Jasmine Curry, who's fresh out of the academy. Each member will contribute in his or her own unique way during the game, although be warned, newbie Jasmine is a bit of a spaz. The graphics are coming together pretty well on both platforms. The graphics engine provides a good amount of performance for both the Xbox and the PlayStation 2. Ethan looks and moves quite well, sporting fluid animation and a detailed character model that looks nothing like Tom Cruise. The six different environments offer a nice amount of variety between them. You'll also find variety within the different levels as you make your way through your missions. Level design is solid and covers all the necessary bases in a stealth action game. You'll find nooks and crannies to hide in, areas for using your grappling hook, and other assorted gadgets on your adventures.

The game's audio is very well done, which is a very good thing given how important sound cues are as you slink through the shadows. The voice acting is good, as Ethan is sporting an appropriately gravelly voice that is much more appropriate for his character than Tom Cruise's rather high-pitched whine from the films. However, in the case of Luther, it couldn't get any better than using Ving Rhames. However, the strong voice acting is surpassed by the quality of the ambient sound which helps pull you into the action. Whether it's the cranking of machinery or the hum of a laser grid, the audio in Mission Impossible definitely sucks you in. You'll find yourself nervously straining to hear sounds from nearby guards as you slink about some areas.

Mission Impossible: Operation Surma is shaping up to be a solid stealth action game that appears to cover all its bases. While the game doesn't do anything revolutionary with the genre, it doesn't defile it either. Anyone looking for a stealth action game with good visuals and solid gameplay--or those with an infatuation with Ving Rhames--will want to keep an eye out for Mission Impossible: Operation Surma when it ships this fall. 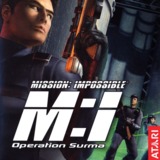