Minecraft-Like Lego Worlds Announced for PS4 and Xbox One

The sandbox game is coming to consoles in 2017.

Lego Worlds, the open-ended Minecraft-like game already available on PC through Steam Early Access, is also coming to PlayStation 4 and Xbox One.

The game will launch on February 21 for PS4, Xbox One, and PC, Warner Bros. announced today. That's the date the game will leave Early Access on Steam and see its full release. It sells for $15 on PC, though a final price point for PC and console was not mentioned in today's announcement.

Warner Bros. is also releasing a DLC pack called Lego Agents, featuring more characters, vehicles, and weapons inspired by the Lego Agents physical toys. This expansion will launch first on PS4, where it will remain exclusive for 90 days.

Lego Worlds was released in June 2015 with little fanfare. The sandbox game is made up entirely of Lego bricks, which players can manipulate to build basically whatever they want.

GameSpot's Lego Worlds Early Access review from June 2015 said, "It's an absolute delight to explore and build even in the game's current state, but there's still plenty of room to grow." 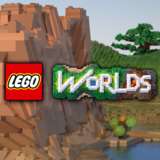