While Midway's financial troubles have been well-documented, it seems like the company is on the verge of rescue, thanks to a $33 million buyout from Warner Brothers Interactive Entertainment. While that's probable good news for some in the company, the future of Midway sports titles is not as... 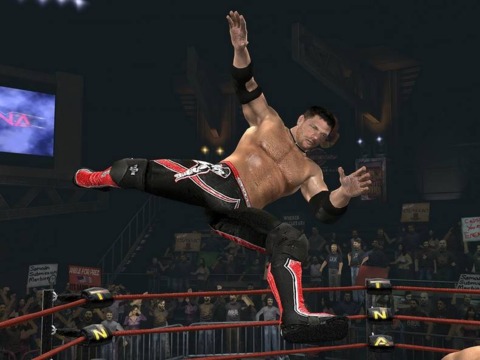 While Midway's financial troubles have been well-documented, it seems like the company is on the verge of rescue, thanks to a $33 million buyout from Warner Brothers Interactive Entertainment. While that's probable good news for some in the company, the future of Midway sports titles is not as bright. Two of Midway's internal studios, Midway Newcastle and Midway San Diego, were not included in the sale and it's the latter that was responsible for the company's entry into the wrestling genre, TNA iMPACT!. According to Kotaku, while the Blitz license is part of the WB deal, Midway's arcade basketball series NBA Ballers and the TNA license are not. As pointed out in a recent Joystiq post, studios not named in the Warner Bros. deal have 60 days to find a buyer before they're shuttered.

While the value of the Blitz brand is understandable, the future of the Ballers and TNA licenses are not so clear. Of the two, the Ballers series is clearly the lesser value--the last game in the series was poorly received by critics and fans alike and furthermore, the NBA license deal with Midway has apparently expired. To me, however, the larger problem is the genre itself. With EA Sports abandoning its NBA Street series (for now, at least), it seems that arcade hoops games have fallen out of fashion, making the likelihood of another Ballers game in the near future a slim one.

Unfortunately, the same thing might just be happening in the wrestling genre as well. Last year's TNA iMPACT! was a decent debut, with a good roster of talent and gameplay that cast a pretty unfavorable light on the relatively ancient SmackDown! Vs. Raw engine. And if iMPACT's sales didn't impress (according to NPD, iMPACT! sold just under 300K copies on all platforms; by contrast, SmackDown! Vs Raw 2009 managed the same number on the Xbox 360 alone), at the very least, the game introduced some much-needed competition to the genre.

Of course that was last year, and things have changed significantly since then. THQ has turned down the hype on the SmackDown vs. Raw series (we've yet to see anything significant on SmackDown! vs Raw 2010), instead focusing its sports marketing muscle on the newly introduced UFC Undisputed series. With THQ looking to gear up for a prolonged and fascinating fight with EA Sports' recently announced MMA game, and the ever-present licensing disputes between THQ, the WWE, and Jakks Pacific, it's understandable that the company wants to focus its energy on its hottest property and move the wrestling game into the background.

None of this is particularly good news for Midway San Diego which is reportedly still working on a follow-up to TNA iMPACT!. It's conceivable that someone could pick up the studio but, for now, it seems today's lean times--both for the studio and for wrestling games in general--will be tomorrow's lean times as well.