The latest installment in the Blitz series is shipped to retailers.

"Gamers and sports fans tired of the numerous slow-paced football simulations will find the high-speed and daring action of NFL Blitz 2001 a welcome escape," said Helene Sheeler, vice president of marketing for Midway. "Improvements to gameplay animation, all-new player modeling, and the new mini games bring even more gameplay and visuals to the over-the-top action of NFL Blitz 2001." 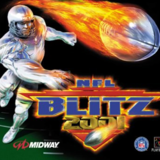