The company sues Sony Ericsson over unauthorized use of its arcade classic in mobile phones.

Midway served Sony Ericsson a steaming plate of litigation as it filed a lawsuit accusing the mobile communications giant of distributing Defender on mobile phones without permission. Midway still holds the copyrights for the arcade classic from 1980 and 1981, according to the lawsuit.

Filed on June 24, the complaint claimed that it never authorized Sony Ericsson's US subsidiary, Ericsson, to distribute the game, and, as a result, its business and property were "severely damaged." Midway wants the court to award it damages and reimbursement of legal fees. It also asked that Ericsson be forced to turn over all offending mobile phones and software in its possession. 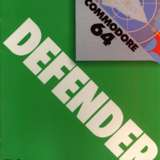