If Hollywood has taught us anything in the past few years, it is that penguins aren't only oh-so adorable, they are also big box-office draws that can rake in the cash for film studios. According to data from IMDB.com, the $8 million March of the Penguins has pulled in more than $77 million in the US, and the $85 million Happy Feet has rung up more than $326 million around the world, $178 million of that coming domestically.

Midway Games is also getting a piece of the penguin pie, thanks to their game adaptation of Happy Feet. The publisher today did a little toe-tapping of its own and revealed that it has shipped more than 1.8 million copies of the game worldwide. The game was released in mid-November on the PlayStation 2, Wii, GameCube, DS, Game Boy Advance, and PC.

The Chicago-based publisher seems to be riding a string of success. Earlier this week, the company announced that it had shipped more than 1 million copies of Mortal Kombat: Armageddon, which was released in October.

The news is good for Midway, which is coming off a quarter which saw it lose $22 million, a slight improvement over the same period the previous year. 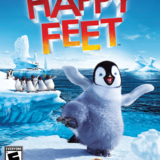