Microsoft's SmartGlass Seems Legit, But It's No Wii U Controller

E3 2012: Microsoft's SmartGlass software turns your mobile device into a touch-screen remote for the Xbox 360. Unfortunately, it's not ideal for gaming.

Microsoft is ever searching for ways to legitimize the Xbox 360 as more than a gaming console. Its latest announcement, SmartGlass, integrates your console with a phone or tablet with the Xbox 360 as a wireless remote and secondary monitor. It lives on mobile devices as an app, and Microsoft is touting that your "intelligent companion" will turn any TV into a Smart TV, essentially allowing you to access Web content from your couch. For some, this will prove to be a valuable tool in their media arsenal, but the gaming-centric crowd might not benefit as much as Microsoft hopes. Then again, based on its presentation, that may have been its plan all along. 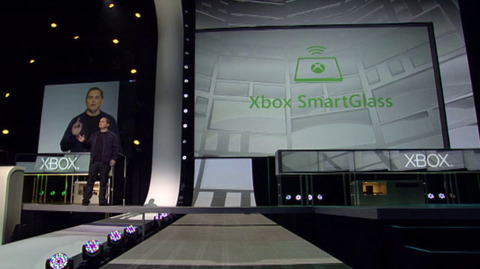 It's natural to draw comparisons to the Wii U's GamePad, but there are drastic differences. Firstly, the Wii U uses the touch-screen controller as its primary means of input, negating the need to juggle devices. Take the Madden SmartGlass demo during the presentation--you pick up a tablet to choose a play, you put down the tablet and pick up your controller to execute the chosen play, and then pick up the tablet to restart the whole process again. That sounds like an unbelievable pain in the ass that gets in the way of the task at hand: gaming.

It's unlikely that developers will be wooed into making SmartGlass-only games as the hardware it lives on can vary greatly between users. We'll see support for SmartGlass within games, but it will likely remain optional, lest Microsoft alienate customers who don't already own a mobile device. Wii U games on the other hand are being designed with the ability to take advantage of this tech from the get-go on a standardized controller, solving all of the aforementioned problems present in SmartGlass as a means of controlling games.

Once the Wii U gets off the ground, it will be interesting to see if Microsoft tries to make a move on its territory. Microsoft can sit back and watch Nintendo struggle through the growing pains of the Wii U and learn from its inevitable mistakes, without the risk of developing a new console with an unheard-of control scheme. When the right idea comes along, you can be sure Microsoft will do its best to capitalize on the concept and make it its own. If it does make a significant move into SmartGlass gaming territory post Wii U launch, that would create an interesting dynamic between the two companies.

Without any mention of additional costs associated with SmartGlass, it seems that people who own an Xbox and a smartphone/tablet can take advantage of these features next fall. It won't necessarily revolutionize gaming, and Microsoft likely won't make a dollar off the app, but it's a valuable asset for its portfolio. It has done a good job of building up the media capabilities of the Xbox 360 since its release, and SmartGlass serves these existing capabilities in an innovative way. In that realm, it's a great, if not long overdue, development.