The studio is hoping to break the record for most games played in a single day.

Microsoft Solitaire is celebrating its 30th anniversary today by trying to set the record for the most games of Solitaire completed in one day.

In a blog post celebrating the anniversary on their official site, Microsoft shared that more than 35 million players, from more than 200 countries, and in 65 different languages, log on to enjoy a few games each month.

Solitaire, which was first released as Windows Solitaire on the Windows 3.0 operating system, has been a regular presence in the casual gaming space since 1990. Microsoft boasted that the solo card game "helped people learn how to drag and drop items on their computer screens using a mouse, which was novel at the time."

Microsoft is encouraging Solitaire players to play as many games as possible on May 22 in order to break the record for most games completed in a single day. Microsoft hasn't posted the current record it is trying to beat, but the studio is posting progress updates periodically on the Facebook event page. They'll record games played until 11:59pm PT / 2:59 ET.

Microsoft Solitaire Collection is available for free on Windows, iOS, Android, and on most browsers through MSN games. Download and play a few games before the end of the day if you want to chip away at the current world record holder. You can find more details on the 30th Anniversary event page on Facebook. 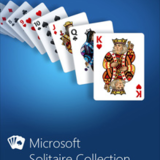