Source: See below. What we heard: The intermittent efforts of the proprietor of Superannutation to sift through the slurry of often-unreliable information on the Internet has yielded another data diamond. The blog has posted a link to a July 17 US Patent and Trademark Office filing by Microsoft for...

What we heard: The intermittent efforts of the proprietor of Superannutation to sift through the slurry of often-unreliable information on the Internet has yielded another data diamond. The blog has posted a link to a July 17 US Patent and Trademark Office filing by Microsoft for the term "343 Industries" for use with "computer programs, namely, game software for use on computers and video." Other than Microsoft's address and attorney of record, no other information was given. 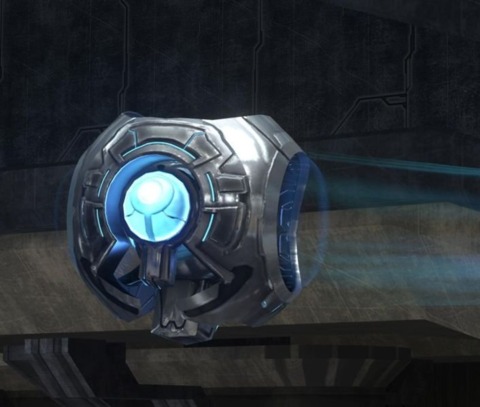 Though the number "343" might mean nothing to many gamers, it has major significance to fans of the Halo series. First and foremost, it is the name of 343 Guilty Spark, one of the series' most humorous, enigmatic, and--ultimately--lethal foes. An artificial intelligence housed inside a diminutive-but-powerful metal shell (pictured) built by the Forerunner race which constructed the game's titular ringworlds, 343 was worshipped as "The Oracle" by the multiracial interstellar theocracy known as the Covenant--the game's primary antagonist race. Unfortunately, for much of the Master Chief story arc, the machine is focused on activating the Halo arrays and destroying all life in the galaxy.

The name "343 Industries" also sounds less like a game and more like a label--a label that would be perfectly apt for the internal division of Microsoft Game Studios dedicated to the Halo franchise. The group, which currently has no distinct title, has drawn some notable names to its ranks, including former Kojima Productions producer Ryan Payton and Bungie alum Frank O'Connor. The Halo series' creator, the now-independent Bungie Studios, is still developing new installments, such as this fall's Halo 3: ODST and next year's Halo: Reach.

The official story: "We have nothing to announce at this time." --Microsoft rep.

Bogus or not bogus?: While thin, it's looking not bogus. Unless Microsoft is planning some sort of Railroad Tycoon-type manufacturing simulator, 343 Industries is almost certainly not a game. And if it's an internal studio--which many publishers give distinct identities to foster talent--the number points squarely at the Halo franchise.

[UPDATE] At Comic-Con, Microsoft announced 343 Industries is indeed a new division which will oversee the creation of Halo books, clothing, collectibles, and other content as well as liasing with studios such as Bungie on games.