For many employees in Microsoft's headquarters outside Redmond, Washington, today began with a coffee-spit-take-worthy shock. After disappointing October-December quarter earnings, the company announced that it will eliminate 5,000 jobs from its worldwide payroll of nearly 90,000. The cuts will be made in the marketing, sales, finance, legal, HR, IT, and research and development departments during the next 18 months, with 1,400 pink slips being sent out today. 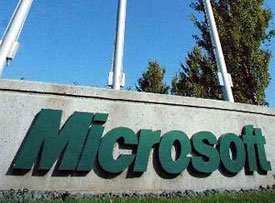 "While we are not immune to the effects of the economy, I am confident in the strength of our product portfolio and soundness of our approach," said Microsoft CEO Steve Ballmer in a statement. "We will continue to manage expenses and invest in long-term opportunities to deliver value to customers and shareholders, and we will emerge an even stronger industry leader than we are today."

A survey of analysts conducted by the Thomson Reuters news service had been expecting between $0.49 and $0.50 per share. The fact that the decline came despite quarterly earnings increasing $260 million to $16.63 billion year-on-year caused Microsoft's stock to drop sharply. As of press time, Microsoft's share value had fallen about 10 percent, trading near its 52-week low of $17.50. Immediately after the announcement, the stock sunk even lower to $17.19 per share.

Despite the mass layoffs and profit dip, there were some bright spots in today's Microsoft announcement. One of them was the Entertainment and Devices division, which makes the Xbox 360 console and includes Halo 3, Fable II, and Gears of War 2 publisher Microsoft Game Studios. Bill Koefoed, general manager of investor relations for Microsoft, broke down the sector's earnings in a conference call with analysts.

"[The] Entertainment and Devices division revenue grew 3 percent [year on year] to $3.2 billion," explained the executive, rounding up the actual $3.18 billion figure. "A record 6 million consoles were sold in the quarter, growing [the user base] by over 41%. In Europe, Xbox 360 sales nearly doubled those of the previous holiday season. Based on US NPD numbers released last week, Xbox 360 outsold PS3 two to one. We continue to lead the industry with our software attach-rate ratio of 8 to 1."

Chris Liddell, Microsoft's senior vice president and chief financial officer, played up the 360's performance during the analyst call. "The Entertainment and Devices division delivered revenue above the high end of our guidance, driven by a record number of consumers purchasing Xbox 360 consoles during the holiday season," he said.

However, the CFO also warned that there could be clouds on the horizon for the game industry. "The Entertainment and Devices division is highly dependent on consumer spending, and while we feel good about the first-half results, a shrinking consumer-spending environment would weigh on the segment's results in the second half," cautioned Liddell. He went on to say, "Console revenue will likely decline as a result of our earlier pricing actions," referencing the fall price drop of the lowest-end 360 model, the Arcade, to just $199--$50 less than the previously cheapest Wii.