Microids will bring its most popular console and PC games to the UK.

Microids, the French-based games developer and publisher, announced that it is releasing game titles in the UK that were formerly only released in France. The newly formed Microids UK will be in charge of distributing Dracula and Amerzone for the PlayStation and PC, and Corsairs Gold for the PC platform.

Amerzone is an adventure game that takes gamers into the rainforest in search of a fabled white bird and lost hunters. A static adventure game in the mold of Myst or Riven, Amerzone offers puzzles, lush and interactive environments, and hours of gameplay.

Dracula is a dark adventure title, developed using the Amerzone engine. The game's ominous gameplay and intuitive controls have made it popular in Europe.

And finally, Corsairs Gold for the PC is an adventure/strategy game, set among the world of pirates in early 1700. Players can sail, trade, spy, and engage in warfare, as they attempt to become the most feared pirate of the seas. The game features 50 unique missions set throughout the world, and accurate replicas of real-life sea vessels.

No release dates were announced, but expect to see all three games to be released in UK sometime in 2000. 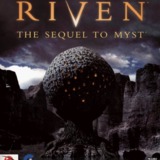 Riven: The Sequel to Myst
Follow
$30.97 on Walmart
Buy