SAN FRANCISCO--The in San Francisco had more than just games on display today. Wilson Cheng, product manager at Konami Digitial Entertainment, said, "I am very happy to announce that Konami will be introducing a new type of genre that combines different types of media onto one UMD disc."

Thankfully for longtime Konami fans, the subject of the "new genre" is something gamers will be very familiar with. It also appears to answer questions raised by legendary designer Hideo Kojima, who recently told Famitsu that he was working on a non-game project for the PSP called Metal Gear Solid BD.

It's unclear just how interactive the comic will actually be, but a trailer shown at the event certainly confirmed it will be animated. Voice bubbles appear in sequence with the game's audio, and static images slide across the screen as comic-style effects like "Bang!" or "Pow!" appear onscreen when characters fire bullets.

Konami has not announced a release date or price for Metal Gear Solid Digital Comic. 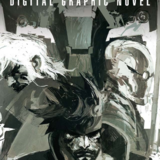