The line between the real world and a digital world based on the real world is becoming more and more blurred as next-gen systems and high-end PCs crank out sophisticated graphics and physics. Storytelling in games is also getting more realistic, and for shooters set during modern times, that can mean some ruffled feathers.

The mayor of Mexican border town Juárez, Héctor Murguía Lardizábal, has condemned Ubisoft's Tom Clancy's Ghost Recon Advanced Warfighter 2 and is asking Mexican federal authorities to act immediately to get the game out of children's reach, reports the El Paso Times. Lardizábal believes the game paints a negative picture of his city and encourages tension between the United States and Mexico.

Set in Juárez, Mexico, and El Paso, Texas, GRAW2 sees an elite combat unit battling Mexican rebels in the year 2014. Lardizábal sees the game as a criminal act against the intellectual capacity of the people of Juárez, whereas Ubisoft sees the game as a fictional story, according to the paper.

The Tom Clancy games, which include the Rainbow Six and Splinter Cell series, have upset government officials before. 2004's Ghost Recon 2 drew harsh words from the North Korean government, and closer to home, Tom Clancy's Rainbow Six Vegas upset Las Vegas mayor Oscar Goodman, who said the game could be "economically harmful" to his city.

Whereas Lardizábal waited until the day of GRAW2's release to voice his protest, Venezuelan legislator Gabriela Ramirez spoke out against Pandemic Studios' upcoming Mercenaries 2: World in Flames way back in May 2006. Ramirez said the game, set in Venezuela with the object of taking on a "power hungry tyrant," was "a justification for an imperial aggression."

Rated T for Teen, Ghost Recon Advanced Warfighter 2 is now available for the Xbox 360 and PC and will be released on the PC, PlayStation 3, and PlayStation Portable later this year. For more information, read the review of the Xbox 360 version. 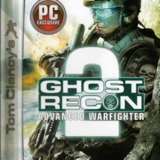 There are 801 comments about this story
Load Comments (801)