Nintendo officially reveals that the renamed Metroid Prime 2: Echoes will support up to four players.

Those awaiting Metroid Prime 2 got a double dose of news today. First was Nintendo's official confirmation that the sequel to the award-winning sci-fi adventure will indeed have multiplayer functionality.

"For the first time in the history of the celebrated Metroid franchise, up to four players can battle each other as they search for weapons, grapple across ceilings, and turn into morph balls to make their escapes," read a new product page on the Nintendo of America Web site. The site also included from MP2, which showed a quartet of Samuses battling it out on a split screen.

Nintendo also took the opportunity to unveil the sequel's final title, Metroid Prime 2: Echoes. However, the publisher did not elaborate on the title's significance. GameSpot will have more information on Metroid Prime 2 as it becomes available. 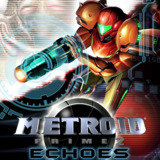