"We know this response will not please everyone."

If you already own Metro 2033 and Metro: Last Light for the PC you might be wondering why developer 4A Games isn't offering the Redux versions of the games for free, especially since the latter came out just a little over a year ago.

The short answer is that 4A has put a ton of work into the Redux versions of the games, which significantly improve both their gameplay and graphics.

"Almost the entire team of around 80 people at 4A Games will have been working on the Metro Redux titles for almost a year by the time we release next month," 4A said in a post to Metro 2033 Redux's Steam Community page.

As illustrated clearly by a recent comparison video, it has been a substantial project for 4A, with the main goals of significantly updating the 4A Engine, updating both games to run on it, and adding a host of new gameplay features and content.

4A admits that the Metro 2033 Redux, which came out in 2010, is a far more significant upgrade over the original than Metro: Last Light Redux. However, 4A thinks that offering the Redux versions of the game for a 50 percent discount if you already own the originals is a fair deal. It said it considered other deals, like offering a 75 percent discount on Metro: Last Light Redux if you bought the DLC, but that this raised a number of practical and logistical challenges. Patching the games was also impossible for technical reasons (changes in the Redux versions required dropping 32-bit support).

"We know this response will not please everyone," 4A said. "But even though you still might not agree with the rationale, we do hope you understand that our goal was to reward, not exploit, existing owners while still making a viable business model that allowed this Redux project to go ahead on PC as well as console."

The 50 percent discount, which takes the price of each Redux version of the down from $25 to $12.50, is available only to those who bought the game for PC. The Xbox One and PlayStation 4 versions of the games will be sold for $25 each or as $50 bundle.

Metro Redux launches on PS4, Xbox One, and PC on August 26.

What are the Redux versions of the Metro games worth to you? Let us know in the comments below. 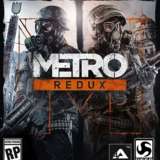