Metro 2033 And Last Light Switch Ports Are Stunning, Both Out Now

The Nintendo Switch has been home to many ports of gaming's recent past, even games that you may have never believed would have been playable in handheld form like The Witcher 3, Doom (2016), Wolfenstein II: The New Colossus, and Hellblade: Senua's Sacrifice. Now, we have both of the Redux versions of Metro 2033 and Metro Last Light, two tremendous single-player FPSs out now Switch. And having put some time into both, I'm coming away wildly impressed--these are Switch ports done right.

You kind of know what you're getting into when it comes to Switch versions of bigger games; lower resolutions, lower framerates, muddier textures, and toned-down effects. Those factors don't necessarily diminish the quality of the game itself though, so long as it's done within reason and the game remains playable. However, these Metro ports exceed what we've come to expect for Switch--they look sharp and run extremely well, all things considered. You can see for yourself in our gameplay footage below.

Naturally, the compromises are noticeable when playing in docked mode on a full size display, but Metro Redux is truly stunning in handheld mode. It's not just that the condensed screen mitigates the perceivable blemishes of lower graphical fidelity, it's that the graphical compromises are somewhat minimal as not to muddle or obscure overall visual clarity. Even lighting effects and character models, which are imperative to the Metro experience, still shine through.

Granted, these Metro games mostly take place in fairly contained areas with tight, dark spaces. But even outside of those instances where big firefights break out or when you have to navigate larger areas on the surface, performance and visuals remain consistent. The limitation in framerate is manageable, too, because Metro 2033 and Last Light maintain a near-constant 30 frames per second on Switch. Although it's not the 60 fps or 144 fps we can get from a proper PC, there haven't been any distracting dips when the action ramps up. And coming from someone who prioritizes PC versions because of framerate and higher refresh rate, that consistent 30 fps is viable for Metro's slower, methodical pace in and out of combat, especially for a handheld experience.

Metro's style of slow-paced action and exploration also means that the constraints of the Joy-Con analog sticks are easier to deal with; using a bit of auto-aim and motion controls to fine-tune aiming down sights, playing in handheld mode feels just right. The console's shortcomings have less of an impact on Metro in comparison to other shooters; combat in Metro doesn't necessarily require quick reflexes or pinpoint precision most of the time, hardly hindering my ability to overcome combat scenarios.

As for the games themselves, Metro 2033 and Metro Last Light are still absolute achievements as narrative-driven FPSs--some may say Last Light carried the legacy of Half-Life 2 of sorts. Metro takes you through the horrors of surviving in the underground tunnels of a post-apocalyptic Russia where the surface is ravaged by radiation and mutated beasts lurk around every corner. The otherworldly species of the Dark Ones provide a mysterious narrative crux as you learn about them in the midst of conflict between human factions. A great mix of stealth, unforgiving firefights, and tense exploration make up the Metro games. And the resource management of gas mask filters and military-grade bullets (used as either high-damage ammo or currency) keep you on your toes. The best part of Metro's captivating campaigns is the sense of vulnerability it instills through its atmosphere and gameplay systems--and these aspects remain untouched in 2033 and Last Light's Switch ports.

Metro 2033 and Last Light were once technical showcases, often used as PC benchmark tools to gauge performance. It's an accomplishment by developer 4A Games to bring both to Switch at this level of quality. In a world where games like The Witcher 3 and Elder Scrolls V: Skyrim are playable on Nintendo's handheld console hybrid, the bar for quality Switch ports of big games is pretty high. Metro 2033 and Last Light Redux meet, if not, exceed, those expectations. 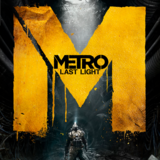