We get an exclusive first look at the DVD documentary behind all the games in the landmark Metal Gear series as told by the man who made them, Hideo Kojima.

Konami will pay Metal Gear devotees a big favor in the coming weeks with the just-revealed documentary DVD Metal Gear Saga Vol. 1, which will be offered with preorders of Metal Gear Solid 3: Subsistence, the upcoming special edition of 2004's award-winning Snake Eater. We got an exclusive sneak peek at this most recently announced addition to the illustrious Metal Gear series, which sounds like just the sort of fan service diehard devotees to this long-running series would expect.

Metal Gear Saga does the seemingly impossible by making sense of the five major games in the Metal Gear canon, including (in chronological order storywise) Metal Gear Solid 3: Snake Eater, Metal Gear, Metal Gear 2: Solid Snake (released only in Japan on the MSX), Metal Gear Solid, and Metal Gear Solid 2: Sons of Liberty. The DVD will be split up into five chapters over 30 minutes, covering the series' overarching narrative, which makes us wonder how the entire story can be told in less than a half hour, when all of Sons of Liberty alone would probably take three and a half.

The documentary will also include candid interviews with the man behind Metal Gear, creator Hideo Kojima, who will comment on everything from the origin of the series to its conclusion in Metal Gear Solid 4: Guns of the Patriots. He'll also give the dish on the infamous Snake's Revenge, the unofficial sequel to Metal Gear on the NES, which made its way to the North American market in lieu of the actual sequel, Metal Gear 2: Solid Snake (and which was made without the involvement of Kojima or any of the original Metal Gear team members).

Kojima announced at last fall's TGS that MGS4 would be his and series' illustrator Yoji Shinkawa's final outing with the Metal Gear series. Though there was never any doubt about life after Kojima for Metal Gear, the DVD looks like it's going to reveal that at least one major player is leaving with the creator. What we've seen of Saga seems to indicate that if anyone picks up where he left off, the mulleted yet charismatic protagonist Solid Snake won't be revived with the franchise. Over the backdrop of MGS4, Saga reveals that the game is "the sixth and final chapter in the story of Solid Snake." Of course, other directors could go on to create games surrounding lesser characters like simpering antihero Raiden, but without Kojima or Snake, a Metal Gear is Metal Gear in title alone.

The DVD will also include all of the recent Kojima Productions trailers--including those for Metal Gear Solid 4, Subsistence, and Metal Gear Acid 2--and will be packaged in a foil-embossed cover with specially-drawn artwork by Shinkawa. Those looking to pick up the DVD should expect to get it for preordering Metal Gear Solid 3: Subsistence at major video game retailers beginning mid-February. We'll bring you more information on this DVD as Subsistence approaches. 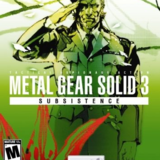