TOKYO--The Metal Gear Solid series is one of Konami's biggest franchises, having sold a cumulative 14.6 million units worldwide. However, little is known about the first Metal Gear, since it was released for the MSX2 home computer nearly two decades ago.

In the original Metal Gear for the MSX2, the player takes the role of Solid Snake, who is still a rookie soldier. Unlike the full-on action of other games in 1987, Metal Gear required players to sneak around to avoid detection. On the mobile phone port, players that beat the game will be rewarded with a Mugen bandana item that allows infinite ammunition. The game also has a time attack mode, where players can challenge the different bosses in the game.

With the appearance of the mobile phone version of Metal Gear, Konami further fuels the hype surrounding the upcoming release of Metal Gear Solid 3: Snake Eater for the PlayStation 2. While Konami’s official stance is that Metal Gear Solid 3 will be released in Japan and the US within the year, a retailer earlier this month reported that the game may hit Japan as early as October. 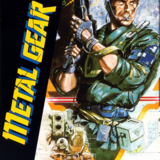