We finally get our hands on a translated version of Snake's card-battling adventure--and learn some new details about it in the process.

At its San Francisco-based press event today, Konami finally unveiled an English-translated version of Metal Gear Acid for the first time. The game represents the first major change of direction for the popular stealth-action franchise--Acid isn't so much stealth-action as it is stealth card-battling. Cards? If you haven't tried the recently released-in-Japan import version, trust us: it plays fine. In fact, this is an interesting shift for Metal Gear, since it places less emphasis on shooting people in the head and more on making you consider your overall surroundings.

Not surprisingly, the two missions in the Acid demo were the same two introductory ones we've played through several times before at TGS and other trade shows, in which Solid Snake attempts to breach the outer perimeter of a research facility on the African Lobito Island. That means the same basic cards and abilities, such as the SOCOM, ration, body armor, and claymore mine, were available. At least the new English translation let us get a better feel for the storyline, which has Snake being called back into action to uncover the secret of the mysterious Pythagoras, a weapon of some kind being sought by terrorists who've hijacked a plane full of innocent passengers (one of whom happens to be the president). But who the hell are these militants? One cutscene depicted the hijacking of the plane, and in it, two doll-like creatures named Elsie and Frances frolicked around the plane while gassing the passengers, joking about how they should just kill them and be done with it. It's a Metal Gear game, so you have to expect some weirdness--but we're looking forward to seeing how they explain that one.

The basic gameplay in Acid remains easily accessible, and we found it even easier to grasp now that all of the card effects and so on are in English. If you're a Metal Gear fan but you're put off by the card-battling concept, you should find solace in the fact that the game provides a seamless tutorial segment that's wrapped up in the introduction of the storyline, and it gets you up to speed on the gameplay quickly. You'll be dealt a hand of cards from your deck at the beginning of your turn, and you can use the items or abilities listed on the cards or sacrifice them to move around the isometric mission areas. The gameplay is easy to grasp and fits in well with the overall Metal Gear milieu.

During a presentation on the game, Konami reps went in-depth about the card-collecting aspect of Acid, which specifically involves the use of special-effect cards called character cards. Some cards will be collected during missions, but many will be purchased from a card store outside the story mode. You'll accumulate points based on your in-mission performance, and these can be cashed in at the card store to purchase cards bearing characters from past Metal Gear games. These cards can then be used in-game to invoke lots of offensive and defensive abilities that you can't get with the regular cards.

We saw Metal Gear Solids 1 and 2 represented here, though we were assured that cards from other games would also be available. One card will feature the Ninja, for instance, while another card will bear Metal Gear Ray from MGS2. The latter unleashes a massive beam at nearby enemies, and you get a nice little full-motion video, taken from the game in question, of Ray performing its attack whenever you use the corresponding card. Another card we were told about will feature Johnny Sasaki, who MGS fans will know as the soldier who's always sitting on a toilet in gastric distress. Johnny's special effect? He flushes your entire hand, allowing you to draw a whole new deck of cards at once. Looks like the series' offbeat sense of humor is intact.

However, the biggest news about the US release of Metal Gear Acid is that it will include a wireless two-player competitive mode. Director Shinta Nojiri told us he'd wanted to include the mode in the original Japanese version, but it was cut due to time constraints. We got a brief look at this mode during a video presentation at Konami's press event, and it looks like some (if not all) of the two-player battlegrounds will have the overbright, Tron-style look of previous Metal Gear Solid games' virtual reality missions. You won't be able to trade cards back and forth with the other player; rather, loading up your deck with your best cards and then unleashing them on your opponent will be the preferred method of showing off how well-stocked your hand is. We're very excited about the inclusion of this new mode, which should lend the game tons of replay value once you've finished the core single-player story.

We're told that the US version of Metal Gear Acid is more or less finished, and though Konami is so far only committing to a "spring 2005" release date for the game, unofficially the company is saying it hopes to have the game on shelves alongside the PSP hardware in mid-March. Nojiri said that in addition to the new two-player mode, the development team has used the extra time to polish up the game in a number of unspecified areas, so we look forward to seeing how the final US release will turn out. For more information on Metal Gear Acid, refer to our previous coverage of the game, and be sure to stay tuned for more in the coming weeks. 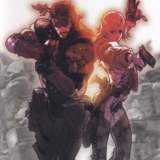