Metal Arms confirmed for the PS2

VU Games announces that it will bring its upcoming shooter to the PS2 as well as the Xbox and GameCube later this year.

Vivendi Universal Games has today confirmed that Metal Arms: Glitch in the System, which was announced for the Xbox and GameCube in April, will also be released on the PlayStation 2 later this year. The lighthearted third-person shooter, which is currently in development at Swingin' Ape Studios, will see players assuming the role of a small robot named Glitch who is charged with saving his planet from a horde of evil and no doubt bigger robots.

All three versions of Metal Arms: Glitch in the System are currently scheduled for release toward the end of this year. For more information, you might like to check out our previous coverage of the Xbox and GameCube versions of the game. 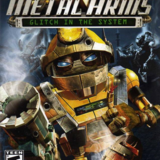