We take a look at the last chapter of the Arland storyline in this long-running RPG franchise for the PS3.

While the Atelier series hasn't been a prime target for English localization (seven titles out of 20 are in English), it nonetheless has been a cult series for role-playing game enthusiasts in and out of Japan due to its crafting and item-synthesizing mechanics. Developers Gust Corporation recently showed off new gameplay footage of Meruru no Atelier: Arland no Renkinjutsushi 3 (or Atelier Meruru: The Alchemist of Arland 3) in anticipation of the title's release in Japan next month for the PlayStation 3. Seeing as this will be the last game in the Alchemist of Arland story arc, the developers are bringing in every major character from the past two games for one last item-mixing adventure of potentially epic proportions.

In this installment, you control a female alchemist named Meruru Rede Arls, who is given the task of transforming the kingdom of Earls into a country as great as Arland. She travels across the countryside brandishing a blouse with long sleeves, a pink cape, and a crown that's slanted on the left side of her head. Accompanying her are two other alchemists named Totori Helmond and Rorona Fryxell. The former starred in Atelier Totori: The Alchemist of Arland 2 and acts as Meruru's mentor. The latter is from Atelier Rorona: The Alchemist of Arland, but now she has turned into a little girl thanks to a potion ingredient mix-up by Meruru.

New companions include the maid Kaena, who attacks with a giant hammer and can boost party members with her song-based support skills, and Rufes, a stoic male who is a part-time government official and a part-time homeroom teacher for Meruru. Other characters from past games make an appearance as party members, like Atelier Totori's Mimi and Gino.

Since the main focus of the game is to pimp up your country, Meruru will have to synthesize items and help out citizens in need. As you complete quests which involve going outside and smacking a random encounter or two for items to synthesize, you'll earn development points which are used to build new facilities in Earls. Constructing new amenities and buildings not only will make the kingdom populated and livelier (not to mention well stocked with better items and equipment for alchemy purposes), but will increase your kingdom rank. When it goes up one rank, more places in the kingdom are unlocked for Meruru to upgrade to her heart's content. This reminded us of a few RPG-slash-city-simulation hybrids not unlike Little King's Story and Final Fantasy Crystal Chronicles: My Life as a King, only with that Atelier twist where the main characters could combine random piles of junk into something valuable.

Encounters in an area are not random; Meruru and company can choose to either avoid them (outrun, outjump, or even use Meruru's wand to stun them) or just touch them to initiate a battle. Combat will be turn-based with a movement order table shown on the right side of the screen. Each character has the option of either attacking with their default weapon, using their items, or using special abilities. Being alchemists, Meruru and Totori are packed to the brim with flying swords, magic missiles, and giant cannons (crafted beforehand in Meruru's home base) to deal with foes, with the additional option of amplifying their item attacks with their special abilities.

In one instance, Meruru can either launch a single sword onto an enemy or spend additional mana and launch four of them at one go. Totori can call assistance from her maids to either lug bombs at enemies or bring health items to their master. This is pretty useful if she either ran out of items or is afflicted with a status effect that prevents her from using items.

Along with an improved user interface to keep things clean, the game's aesthetics are an improved version of Atelier Rorona and Totori's graphics engine. Combat is flashy enough, and the cel-shaded look of the game fits with the cheery mood of the series. It's tough to say how well the kingdom-building can carry the entire narrative forward, but at the very least it still retains its bright palettes and alchemy mechanics to keep fans of the series happy. RPG enthusiasts well versed in Japanese can look forward to getting their alchemy on next month, on June 23. Those who don't mind spending a little extra can buy the 10,290 yen limited edition, which comes with a Meryl Nendoroid figurine and a stylized paperweight. 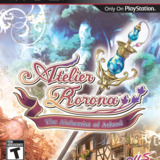 Atelier Rorona: The Alchemist of Arland
Follow
$29.99 on Target
Buy