Men of Valor ships for the PC

Vivendi and 2015's Xbox Vietnam War action title is now playable with a mouse and keyboard.

Vivendi Universal Games and 2015 today announced that Men of Valor has shipped for the PC and is available now in retail stores in the US. Already available on the Xbox, Men of Valor is a first-person action game that uses the Unreal engine to re-create the major battles of the Vietnam War "as they exist in the popular imagination." The title will be released for the Macintosh later in the year. Rated "M" for Mature, Men of Valor carries an SRP of $39.99. 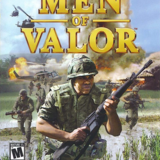