We score some hands-on time with Mega Man ZX Advent, the newly announced sequel to last year's action platformer for the Nintendo DS.

It seems that every Mega Man game spawns at least half a dozen sequels. Mega Man ZX, the action platformer for the Nintendo DS, is no different. Capcom recently announced the follow-up to last year's ZX game, and it looks like it will offer a similar but slightly improved experience. Mega Man ZX Advent still looks and feels very much like a Mega Man game, but we spent some time playing it to see what sets it apart.

Mega Man ZX Advent takes place several years after the events in the original ZX game. Robots known as reploids live in relative harmony with humans, but a war is about to break out between the two races. Of course, it will be up to you to save the world for robots and humans alike. There are two playable characters in Advent: a "boy with no past" named Grey, and a brainy female hunter named Ashe. The two characters have different backstories and will also have different dialogue and story twists throughout the game.

We chose to play as Grey, and the game opened with two hunters exploring a seemingly abandoned facility in search of biometal, the powerful substance that allows hunters to transform into more powerful forms. The hunters stumble upon an unconscious reploid that turns out to be Grey. Grey is awakened, but he doesn't have much time to get his bearings before he is attacked and chased out of the facility.

During the ensuing chase you take control of Grey to play through a simplistic tutorial that will teach you the basics of the game. You'll learn how to do everything from shooting enemies and jumping to climbing ladders and crouching under obstacles. Eventually you flee the facility and encounter the first boss in the game, a huge robotic head with two hands. The boss doesn't put up much of a fight, but after you defeat it you pass out only to wake up in a hunters' camp. You were apparently rescued by a friendly hunter, who shows you the ropes and gives you a hunter's license, which allows you to accept missions and save your game.

On your first mission you escort a shipment of biometal, just as you did in the first ZX game. And, just as in that game, you are attacked midshipment, which causes the biometal container to rupture. The biometal fuses with Grey, giving him the ability to transform into Mega Man Model A. For the most part Model A looks and behaves just like any other Mega Man model. You can tap an icon on the touch screen to transform into Model A, which allows you to jump up walls, dash, and shoot at enemies. There are some unique abilities this time around, though, such as a homing attack. When you hold down the attack button a transparent diamond will show up, and you can lock on to any enemies that are inside that diamond. By moving around you can lock on to up to eight enemies, and when you let go of the attack button you'll fire lasers that home in on all of the targeted enemies. It's a useful ability, but in our experience it's not so powerful that it feels like an unfair advantage.

The more notable feature of Model A is its ability to copy the data of bosses. After fighting a few enemies we encountered a pseudodroid boss named BuckFire who was able to break through certain parts of the environment with powerful attacks. After we defeated BuckFire we were able to copy his data, which gave us the ability to transform into a carbon copy of him with a quick tap of the touch screen. While playing as the boss we were able to perform special attacks and moves that presumably will be required to overcome certain obstacles later in the game. There are eight boss forms in the game, in addition to the five biometal forms and two human characters.

Our demo ended after the fight with BuckFire, but we gathered a bit more information about Advent. The game will have multicard play for up to two players, with both co-op and head-to-head play available. There will also be a single-card minigame that you can play with someone who doesn't have his or her own copy of the game. Advent will also feature more animated movie sequences than in the previous game, and based on the ones we saw, that's a very good thing indeed. Additionally, Advent will have English voice clips for the main characters.

Mega Man ZX Advent looks very much like the previous game in the series, albeit with a slightly darker tone. The parts of the world that we saw were not the typical bright, cheerful Mega Man environments. The areas we explored looked a bit more like dilapidated, abandoned versions of the areas in the first game. We didn't see any carnivals or video game arcades in Advent. Instead we saw deserts, barren wastelands, and cold, industrial complexes. Advent still looks good, though, with huge boss creatures and detailed backgrounds. Just don't expect a significant improvement over Mega Man ZX.

This year marks the 20th anniversary of the release of the original Mega Man, and Mega Man ZX Advent is one of several titles that are being released in celebration of the Blue Bomber's birthday. Expect to see Advent in stores this October, but while you wait, you can take a look at the first screenshots from the game. We'll bring you more on Mega Man ZX Advent soon, so be sure to stay tuned to this gamespace for updates. 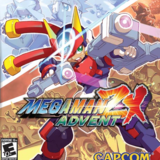