Capcom has been getting a lot of play out of its mighty Blue Bomber franchise over the past year or two, both by rereleasing classic content and re-creating new 8-bit experiences. Into that first category, the publisher has said it will drop the Mega Man Zero Collection, which combines the four original Game Boy Advance games onto one DS cartridge. Today, Capcom said that the Mega Man Zero Collection will arrive on June 8 for $29.99.

Released for the GBA in 2002, the original Mega Man Zero takes place 100 years after the events in the Mega Man X series. The 2D spin-off platformer swaps out the Blue Bomber for new hero Zero, a robot with weapons that include the Z-sabor sword and the Buster Shot hand cannon. The game introduces the diabolic Neo Arcadia government, and Zero embarks on a quest to save robot-kind.

Zero 2 picks up after the events in the first game, with Neo Arcadia continuing to cause strife between humans and robots. By the third installment in the series, the Neo Arcadia regime has been overthrown, but the region faces a new threat due to the machinations of an evil, brainwashing robot. Mega Man Zero 4 concludes the series, as Zero fights to restore balance to Neo Arcadia, again, for the final time.

Beyond simply rehashing the old experience, Capcom notes that each of the games will benefit from a range of new modes. As one example, the publisher called out the new "easy scenario," which will offer a reduced difficulty setting for the games. 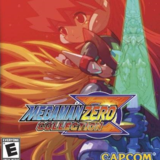