We try out the latest version of Capcom's winning Mega Man redux for the PSP.

LAS VEGAS--Nostalgia can be a dangerous thing. When it comes to classic compilations and the revamping of existing characters or franchises, the danger of mortifying longtime fans runs high. It's rare to find a game that can avoid the minefield that's laid out when a developer starts messing with a classic--case in point, Mega Man Powered Up, the forthcoming update of the original Mega Man. At first glance, the game appeared to be a cute and competent update of the original Mega Man when we saw it at last year's Tokyo Game Show. A funny thing has happened since then, however. Our look at the most recent version of the game at Capcom's Las Vegas press event has revealed it to be a gem of a game that smartly straddles old and new to offer something for everyone.

As we've said before, Mega Man Powered Up is an update of the original Mega Man and comes packing a graphical face-lift and two versions of the game--a classic version, which trumps the original game with its new visuals, and a new version, which includes more content and a more involved presentation. Also, the game features a level editor, which will let you create and share your own levels in the game. Those offerings in and of themselves would be a solid package for fans, however, our newest look at the game has revealed even more content that's being thrown in.

The playable version at Capcom's event featured the bulk of the content that will be in the final game, and it impressed us mightily. The two versions of the original game now differ significantly, with each version featuring selectable difficulty levels. The updated version features extra bosses and a traditional story structure, complete with in-game cinematics. Outside of that, we found a new Mega Man Challenge 100, which tasks you with clearing 100 short levels that become increasingly difficult. The one we tried had us perfecting our platform jumping as we worked to reach a flag. In addition to all of the above, you'll be able to play through the game as any one of the eight boss robots, each featuring their own unique abilities and endings. Sadly, we couldn't try this feature yet, but we're certainly ready to give it a try when we get a playable version in-house. Control for the game is almost as tight as we'd like it to be, although using the analog stick on the PlayStation Portable can be challenging. Fortunately, you can simply use the D pad if you do not like the analog action. The levels we played handled like a dream, although we did notice that playing in the classic mode offered a painful reminder of how tough the series was.

The visuals are bright, colorful, and fun to watch. The face-lift given to all of the familiar Mega Man enemies is cool, although it borders on overdosing on cute. The audio in the game is fun and breezy, but we have yet to hear that awesome, bouncy theme from the TGS demo play anywhere. Based on what we saw, Mega Man Powered Up is a commendable update of a classic game, and whose approach looks like it may well set a precedent as the smart way to mine the past. Whether you're a longtime fan or a newcomer to the series, you should definitely give Mega Man Powered Up some of your time when it ships next month. Barring any horrible disasters, this game should be a much needed gem for the PSP library. Look for more on the game soon. 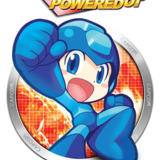