Writer Mattson Tomlin is trying to look beyond the cartoony image we have of the character.

The Mega Man movie has been in pre-production for a while, but is yet to start filming. The film's directors, Henry Joost and Ariel Schulman, have just released Project Power on Netflix, which was written by Mattson Tomlin, who is also writing Mega Man's script. Now, the writer has spoken on what to expect from the film.

Talking to Polygon, Tomlin has said that in the planning of Mega Man, he feels that he needs to "treat him like he's a real person." He says that he was brought in by Joost and Schulman because of how well they worked together on Project Power, and now he finds himself pondering how to best make Mega Man work on screen.

"My way into it was always, what is a compelling story," Tomlin says. "And what is the real soul of that character? We all kind of know him as this cartoonish Blue Bomber who jumps and shoots, and to kind of go beyond that and knowing that, OK, visually it’s going to be a certain thing that is going to please the video game fan, but you know what is the story at the center? They’re like, what is it that this character can really go through?"

He says that the film will be "universal and primal and emotional," and thus relatable. Asked if it will be a film for kids, he said that while it is "something that the kids will like," it's also "not squarely in the kid territory," although we shouldn't expect an R-rated take on Mega Man or anything like that.

If Mattson Tomlin's name sounds familiar, it could be because he's also a co-writer on The Batman. He recently spoke on that film, and said it will deal with Batman's trauma--which is not exactly the most original take, but we'll see. 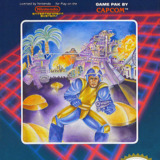